Marquisha thought she had found the perfect apartment in the South Bronx. It was in a safe neighborhood, in her price range and it was close to where her mother lives. As Marquisha has a young child, the proximity to grandma was a big plus. However, the apartment had one major drawback—it was in a building that allowed smoking.

"People can smoke in their units. I see them smoke in the hallway or the entrance even though they aren't supposed to. It engulfs the apartment. I've woken up at times and I could smell it on me," says Marquisha.

New York City has the highest concentration of multi-unit housing in the United States but even with the high numbers of apartments and condos, residents like Marquisha have trouble finding affordable housing that is free from exposure to secondhand smoke. Since moving into the apartment, her asthma has gotten much worse. 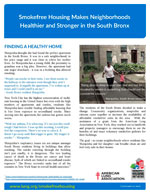 "With my asthma, I'm wheezing. It's not just this small cough I had before. I was up this morning, I could just feel the congestion. There's no way to calm it. It doesn't go away until that trigger is gone. My trigger is smoke," she says.

Marquisha's respiratory issues are not unique amongst South Bronx residents living in buildings that allow smoking. The smoke traveling through the building isn't just smelly, it is dangerous. The two leading causes of death in the Bronx are cancer and heart disease, both of which are linked to secondhand smoke exposure.1 The Bronx currently ranks last of all the counties in New York State in overall health outcomes.2

The residents of the South Bronx decided to make a change. Community organizations, nonprofits and citizens came together to increase the availability of affordable smokefree units in the area. With the assistance of a grant from the American Lung Association in New York, they reached out to landlords and property managers to encourage them to see the benefits of and enact voluntary smokefree policies for their buildings.

The goal—to create neighborhoods where residents like Marquisha and her daughter can breathe clean air and feel truly safe in their homes.

"Being able to sleep in your own bed and not be invaded by smoke is something that should not be considered a luxury." - Marquisha, South Bronx resident

According to Mike Seilback, Vice President of Public Policy and Communications for American Lung Association of Northeast, the South Bronx was an important place for smokefree housing efforts.

The Bronx Smokefree Partnership, a local health advocacy group, started talking with the South Bronx Overall Economic Development Corporation (SoBRO). SoBRO is a nonprofit organization that works to enhance the quality of life in the South Bronx by strengthening business, providing educational properties and providing housing for low and middle income residents.

SoBRO manages over 700 units of affordable housing, both renovated old buildings and newly constructed ones, SoBRO President Phillip Morrow has seen what smoking can do to an apartment.

"The South Bronx is heavily targeted by the tobacco industry. We knew we needed a variety of strategies to help the community to fight back and that voluntary smokefree multi-unit housing policies were going to be a big part of that." - Mike Seilback, Vice President of Public Policy and Communications, American Lung Association

"We've got ventilation systems that smoke interferes with. There are maintenance issues related to smoking. People put down a cigarette, start an apartment fire and cause $100,000 in damage," says Morrow.

While cost control is important, it is not SoBRO's only reason for going smokefree. SoBRO's mission involves a multifaceted approach at community revitalization. They want to create housing that is not only affordable but also allows residents to be safe and healthy.

The Bronx Smokefree Partnership and SoBRO worked together to make the newly constructed Crotona Park Apartments smokefree from opening day. The development created 64 new smokefree mixed-income units. Morrow sees this as something that will spread to otherSoBRO properties.

"Three properties are currently smokefree. And a few under construction that will be smokefree. We're looking into adding it to older properties at lease renewal," says Morrow.

Smokefree housing in the Bronx will continue to spread. Seilback says that each building that goes smokefree generates more and more inquiries from residents about how they can get their building to go smokefree. Landlords and property managers are also noticing that prospective tenants are looking for smokefree buildings, that is a selling point now.

Seilback stresses the gains that happen for everyone in the community. Getting rid of secondhand smoke leads to improvements in health for residents. He says the process of going smokefree can also lead to a broader conservation between residents and landlords about other environmental factors such as mold.