Tobacco-Free Schools in the Heart of Tobacco Country

In most areas of Southwest Virginia, students are not even safe from deadly secondhand smoke at school. In most school divisions, buildings are smokefree but tobacco use is still allowed on school grounds. 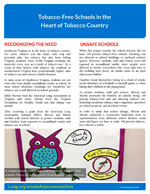 Billie Murray from the American Lung Association in Virginia and Jenny Martin from the Virginia Foundation for Healthy Youth saw that change was needed.

After receiving a grant from the American Lung Association National Office, Murray and Martin worked with school districts to protect students, staff and families from exposure to secondhand smoke and tobacco use at school.

When this project started, the school districts did not have 100 percent tobacco-free schools. Smoking was not allowed in school buildings or enclosed outdoor spaces. However, students, staff and visitors were still exposed to secondhand smoke since people were allowed to smoke everywhere else, even right next to the building near doors, air intake vents or an open classroom window.

Families found themselves sitting in a cloud of smoke on the bleachers of a football or baseball game, or when taking their children to the playground.

To protect students, staff and visitors, Murray and Martin promoted the benefits of schools being 100 percent tobacco-free and not allowing tobacco use, including smokeless tobacco and e-cigarettes, anywhere on school property, and at school events.

In order to make that culture change, Murray and Martin organized a community leadership team so representatives from different school districts could meet and figure out how to make 100 percent tobacco-free schools a reality.

The community leadership team recruited members serving many roles within their school system - superintendents, teachers, bus drivers, principals and nurses. The range of viewpoints helped the team consider all the potential issues with making this change and how best to overcome them.

Murray believes the most important members of the team were the students. While initially shy amongst a group of school officials, Murray says they opened up over the course of the project.

The students knew where their peers were sneaking off to smoke, which helped the team know where to place signage and where to concentrate enforcement efforts after the school became tobacco-free.

"Picking neighboring districts makes for a more sustainable group. The district superintendents and staff meet to discuss other shared issues so they are far more likely to continue meeting and talk about policy enforcement and tobacco use than people who live 100 miles apart." - Billie Murray, American Lung Association in Virginia

Thanks to the efforts of the leadership team, four school divisions made the transition to 100 percent tobacco-free schools – Norton City and Wise, Dickenson and Russell Counties. Russell County’s effort was particularly challenging as Superintendent Brenda Hess initially had little support from her school board.

"Brenda Hess went in front of the board multiple times until she convinced them that this was important and the right thing to do," said Murray.

Once school districts decided to become 100 percent tobacco-free, efforts shifted to making sure people knew about the change and what it meant. Press events led to local news coverage and the project provided signs that openly and clearly stated the new policy.

While school boards are often concerned about complaints and policy violations, staff in the four divisions have been surprised by the popularity of the change and how smoothly students, staff and visitors have adapted to tobacco-free environments.

"Our School Board and members of the school communities have now embraced 100% tobacco-free schools. Teamwork and planning made implementation so much easier than any of us thought." - Brenda Hess, PhD, Russell County Public Schools Division Superintendent.

Murray is proud of the legacy of this project.

"Only 29 divisions in the entire state are 100 percent tobacco-free. Four of those are because of this project. Five more because of a previous project. That’s nine of 29 that are a direct result of this work in Southwest Virginia," said Murray.

Progress has continued after the grant and two nearby school districts in southwest Virginia have become 100 percent tobacco-free based on their neighbors’ examples. Additional school boards are also discussing making this change. Although the project itself may be over, the conversation about tobacco use in southwest Virginia schools has been permanently changed.

"The signs on our grounds. That helps educate our public on the policy change." - Caroll Addington, Norton City Schools