Making Sure All New Mexico Residents Have Access to Smokefree Housing

The American Lung Association in New Mexico has been working on smokefree multi-unit housing since 2009 educating tenants and working with property managers to ensure residents could live in homes that were safe from the dangers of secondhand smoke traveling between units.

However, much of that early work involved market rate apartments. JoAnna Strother, Director of Programs for the American Lung Association in New Mexico, explains why they decided to change their focus.

"We wanted to work where the disparities were greatest, that meant doing smokefree work with public and affordable housing. The residents of these units have higher smoking rates and don't always have as much access to cessation resources."

Patricia Torn, also of the American Lung Association in New Mexico, describes how economics make it difficult for affordable housing residents to move out of a smoky apartment, even when the smoke is having a detrimental impact on their health.

"Many of the residents, particularly senior citizens, have serious lung or heart conditions and can't be around smoke. At the same time, this is the only housing they can afford. They don't have the ability to pack up and move." 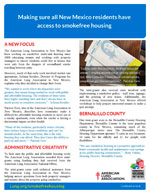 The mini-grants came with technical assistance from the American Lung Association in New Mexico, helping answer questions from both property managers and tenants about the property going smokefree.

"I talked with the residents, let them know we weren't singling anyone out or kicking smokers out. When you don't have those conversations, people can get misconceptions." - Patricia Torn, American Lung Association in New Mexico.

The turnover costs for an apartment that has been smoked in can be several times higher than the turnover costs of a non-smoking apartment. As the funding for Bernalillo County Public Housing comes from public sources, Valdez says a smokefree policy is a way to be a good steward of taxpayer dollars.

When residents were asked about a smokefree policy, many were in favor, citing concerns for safety. Not just the dangers of secondhand smoke but also the increased risk for apartment fires related to smoking materials.

Bernalillo County's Public Housing board passed a smokefree policy. Now, when residents sign a lease, they agree not to smoke in their apartments and common areas, only in designated outdoor smoking areas on the property.

"I don't want to live next to people who are smoking. It's very dangerous." - Josephine Parrez, Resident, Bernalillo County Public Housing

"This is for our children. Smoking rates for tribal youth are rising. We need to change that." - Greta Armijo, the Executive Director of the Santo Domingo Tribal Housing Authority

Armijo and Torn did tenant education similar to what was done in Bernalillo County but they also included some education specific to the Pueblo audience. They educated tribal members on the difference between traditional tobacco, a plant used in many religious ceremonies, and commercial tobacco, an entirely different plant bred by industrial farming to be as addictive as possible.

Very quickly, Santo Domingo leaders passed a smokefree housing policy for new leases. However, Armijo wanted to do more. Armijo and others at the Santo Domingo Pueblo organized a statewide event called the Smokefree Tribal Housing Summit. Representatives from half a dozen pueblos and several Navajo Nation representatives were in attendance.

San Felipe Pueblo continues to work on its smokefree policy. The Pueblo recently completed a large housing expansion, including 15 units in a new multi-unit building for tribal elders. A smokefree policy is a way to protect the new building and its residents.

Torn says the Smokefree Tribal Housing Summit gave them extra momentum, with several representatives eager to get to work. Torn believes more tribal housing will go smokefree within the next year.