The Connection between Lung Cancer and Outdoor Air Pollution

Lung cancer is the #1 cancer killer of both men and women in the U.S. When you think of risk factors for lung cancer, what comes to mind? Most of us think about the risk associated with smoking cigarettes, but did you know that air pollution can also cause lung cancer? Overwhelming evidence shows that particle pollution in the outdoor air we breathe—like that coming from vehicle exhaust, coal-fired power plants and other industrial sources—can cause lung cancer. Particle pollution increases the risk of dying early, heart disease and asthma attacks, and it can also interfere with the growth and function of the lungs. (Indoor air pollution, like radon, can cause lung cancer; but today, we'll focus on the air outdoors.)

What is particle pollution? 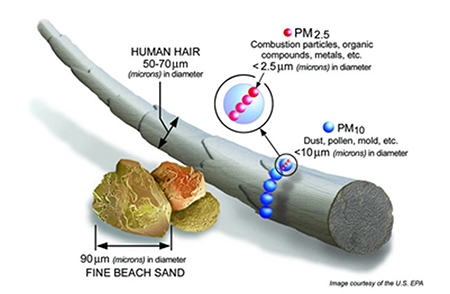 Particle pollution is a mix of tiny solid and liquid particles in the air and can be made up of a number of components, such as acids, organic chemicals, metals, soil and dust particles. It can be emitted directly from wood stoves, forest fires, vehicles and other sources, and it can also form from other types of pollution that come from sources like power plants. For more information on particle pollution, also known as particulate matter, watch this video.

These particles are a tiny fraction of the diameter of a human hair, and much, much smaller than a grain of sand. Research is continuing to determine how the size of and different compounds in  these particles affect human health.

Why does particle pollution harm our bodies?

While breathing in larger sizes of particle pollution can be harmful to our health, smaller particles are more dangerous. Bigger particles can irritate your eyes, nose and throat, but our natural defenses help us to cough or sneeze them out of our bodies. Unfortunately, those defenses don't keep out smaller particles, which get trapped deep in the lungs and can even get into the bloodstream, causing damage to our health.

How do we know particle pollution causes lung cancer?

In 2013, the World Health Organization (WHO) International Agency for Research on Cancer looked at all the available science and concluded that particulate matter causes lung cancer. That same year, an 8-year-old girl in China was diagnosed with lung cancer, becoming China's youngest lung cancer patient. Her doctor said that her lung cancer was a result of air pollution. Levels of exposure to air pollution have increased significantly in some parts of the world, mostly in low and middle income countries with large populations, according to the WHO.

Unlike many industrialized and industrializing countries, air pollution levels in the United States have been decreasing, thanks mainly to the success of steps taken under the Clean Air Act. Still, medical research makes it clear that what we can't see can hurt us. Even though air pollution levels in the U.S. are well below those of China, lower levels of particle pollution found right here in the U.S. have also been linked to lung cancer. It is clear that we still have work to do to reduce unhealthy levels of harmful particle pollution here in the U.S. Lives depend on it.

Who is most at risk?

To learn more about the connection between particle pollution and lung cancer, we spoke with Norman Edelman, MD, Senior Scientific Advisor to the American Lung Association. According to Dr. Edelman, most people still don't know that particulate pollution is a risk factor for lung cancer. That's why it is important to help get the word out.

"We know that fine particles can enter deep into the lungs and are linked to lung cancer, and even more research needs to be done on the precise way that these particles start the cancerous process within the lungs."

How do we protect ourselves from particle pollution?

Check the air quality index forecast for the day and limit your activity if pollution levels are high. Avoid exercising along heavily traveled highways regardless of the overall forecast.

As individuals, we can take steps to limit our contributions to local pollution sources by not burning wood or trash and not idling vehicles, especially diesel engines. It's also critically important to join with organizations like the Lung Association working to ensure that the U.S. continues to reduce pollution in the air we breathe.

Here's a quick way to help right now: join us in calling on our members of Congress to protect the Clean Air Act. This landmark law is responsible for much of the progress our nation has made to clean up particle pollution. Working through the U.S. Environmental Protection Agency (EPA) and state and local governments, we've reduced emissions from power plants and retired dirty diesel engines, just two of the steps that have lowered the particle pollution in the air we breathe. Still, we aren't done. Many areas in the nation have too much of this recognized carcinogen in the air they breathe.

What can we do to ensure that we have clean air?

Unfortunately, some members of Congress are trying to block some of the EPA's work to limit dangerous air pollution. Congress is working on crucial bills to fund the federal government, but these members have added unrelated policy provisions, called riders, that would block EPA pollution limits that will help clean up particle pollution. Riders don't belong in funding bills. Congress needs to pass bills that are free of these harmful provisions, including riders that block lifesaving air pollution protections.

Join us in urging members of Congress to protect our health from air pollution and oppose riders to funding bills. There are two quick ways to make your voice heard.

1. Make a phone call. You can use our Find a Legislator look up, or call the U.S. Capitol Switchboard and ask to be connected by the operator: 202-224-3121. Let your senators and House member know you want them to oppose riders in funding bills, including riders that would weaken protections from air pollution.

2.  Send an email asking decision-makers in Washington to reject any bills that would weaken the Clean Air Act. We've gotten one started for you here—all you have to do is personalize it and click "send."

Working together, we can help all Americans breathe easier.