Raising the Minimum Sales Age for All Tobacco Products to 21

Tobacco 21 is the Law of the Land 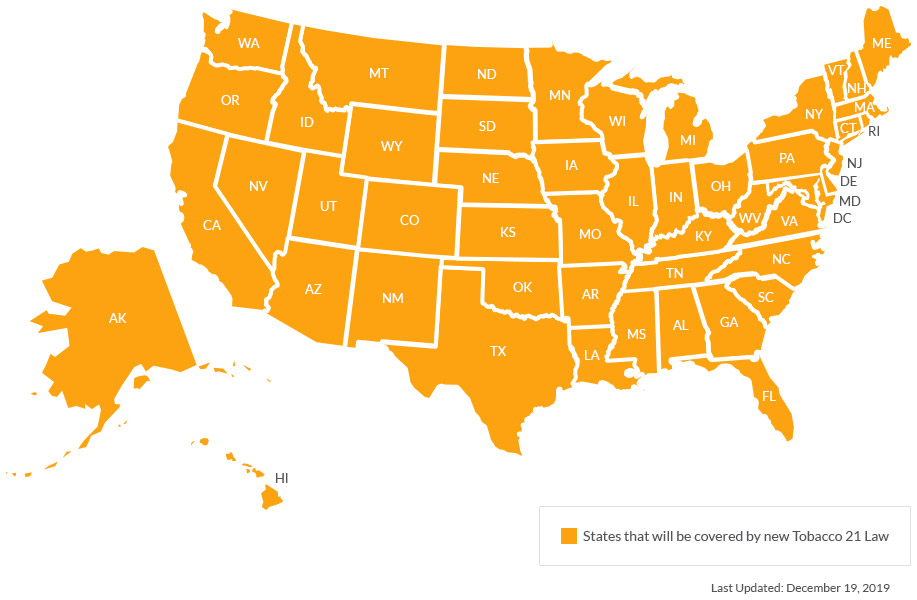 The American Lung Association has advocated for increasing the age of sale for tobacco products from 18 to 21 because it will help save lives. In December 2019, the legislation was included in the federal year-end legislative package and passed by both houses of Congress. President Trump signed the bill into law on December 20, 2019 and it immediately took effect.

In March 2015, a report from the National Academy of Medicine revealed that "Tobacco 21" could prevent 223,000 deaths among people born between 2000 and 2019, including reducing lung cancer deaths by 50,000. This landmark report provided the science to support our advocacy efforts.

Momentum increased as cities and states across the nation began to increase their legal sales age for tobacco products, including e-cigarettes. Nineteen states and DC passed Tobacco 21 laws. Since passage of the federal law, 14 more states have passed laws increasing their state legal sales ages to 21 as of November 2020.

Tobacco 21 is an important component of a comprehensive public health approach to reducing tobacco use. In addition to Tobacco 21 we need to eliminate all flavored tobacco products, stop online (remote) sales and increase taxes on all tobacco products including e-cigarettes. In addition, FDA must begin its premarket review of all e-cigarettes, hookah, cigars and pipe tobacco.