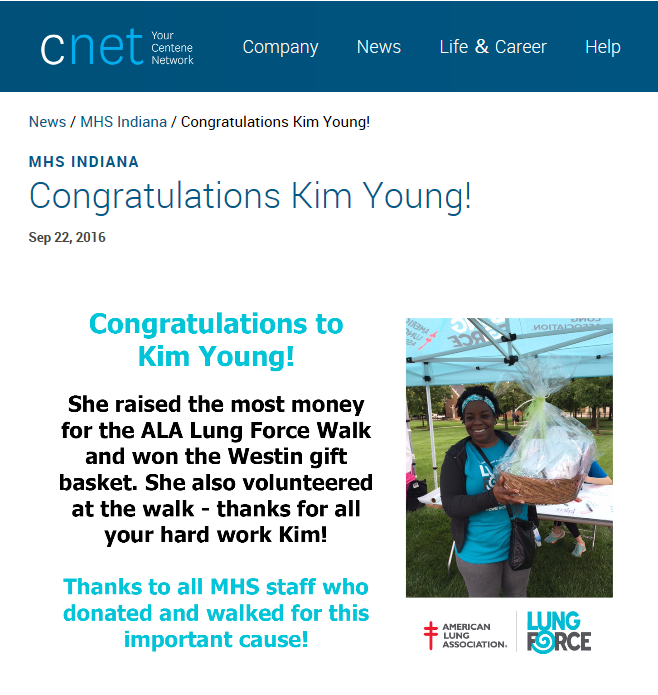 My name is Kimberly Young, and I am a lung cancer survivor! I was smoker, and for many years I had heard people said more people get lung cancer that don't smoke than people who do smoke, so I formed in my mind that since I was a smoker I probably wouldn't get it!

After getting diagnosed with stage 3 lung cancer, I found out the hard way that smokers get lung cancer just like non-smokers and the saying was just a myth. My journey began in 2015 around the time the season changed from fall to winter. I was one who told myself that I always get a cold at the changing of the seasons, so the cough I had was nothing new. But this particular time, the cough just wouldn't go away.

I started with the generic over-the-counter cough medicines then went to name brand cough medicines, but the cough still just wouldn't go away. After weeks of trying to get rid of the cold myself, I made an appointment to go see my primary care physician. I told her I had been having this nasty cough for several weeks that just wouldn't go away. I expected to get some type of medicine, but she wanted me to go get a chest x-ray to make sure I didn't have pneumonia. I got the x-ray, and to my surprise, my primary physician called within a day or two, saying she had made me another appointment at IU hospital for a PET scan because the first showed a spot on my lung. When I asked my physician what a PET scan is and she told me it's a scan that makes a dye glow if a spot is cancerous. I got really nervous.

After that test, she called me and said the spot had glowed and she was making me another appointment with a surgeon. It felt like things were moving way too fast, but my doctor said we needed to move fast just to test that spot and see if it was cancerous. I talked with the surgeon and then took two weeks to get my family together and let them know scans had shown a spot on my lung and I needed to get more testing done. I also took that time to try to stop smoking. My daughter is an RN, and she helped me do some research and get ready for surgery, so I felt pretty lucky because of that.

During surgery, doctors removed a portion of my right lung and some of my lymph nodes because the cancer had started to spread. After five rounds of chemotherapy and 28 straight days of radiology, the cancer was gone – and I'm still cancer free today!

My life has never been the same since I found out I had lung cancer and then had it removed. I have tried to learn all I can about lung cancer and share my experience with women wherever I go. I've participated in the Lung Force Walk, and I spoke at a Lung Force Luncheon about how lung cancer is a real threat and a silent killer, especially in women.

It would be my honor to continue that by going to Washington to represent Indiana and let Congress know how important it is to fund lung cancer research.