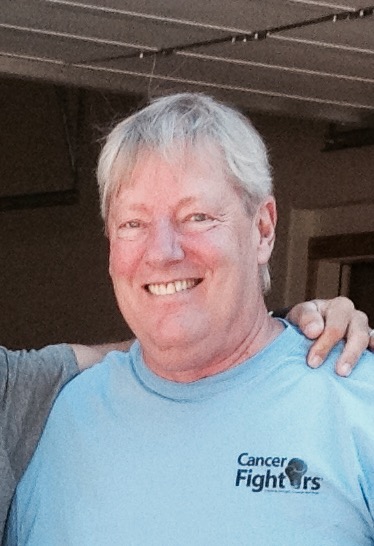 I was diagnosed with a Pancoast tumor in the summer of 2009.

I spent a full career in the painting industry. I started as an apprentice in 1972. I joined the union right after my wife Susan and I were married. I worked in treatment plants, factories, processing plants and buildings of all descriptions. We worked around every hazardous product there is including lead, asbestos, heavy metals, hydrocarbons, epoxies, and even volatile organic compounds.

I was a smoker from a teenager until I quit at age 52. The words lung cancer didn't really come as a big surprise. I had seen older coworkers having lung issues and lost many of them over the years. My father-in-law lost his battle with lung cancer as well as a few other relatives. I simply assumed it was my fate like this before me. I felt as though I outlived my usefulness. On the other hand, I had a full career, paid into my pension plan for almost 40 years and wanted to live to enjoy the retirement I worked so hard to attain.

I was getting nowhere at home chasing one symptom after another for over four months. The family practice saw no need for a chest X-ray for what they determined was a muscle spasm. The pain in my back continued to increase over that time until I gave up on that practice and found a new doctor. I demanded a chest X-ray and got it that day. Three weeks later, they called with the news of a density in my upper chest. A CT scan revealed a Pancoast tumor the size of a lemon at the top of my right lung. It had worked itself into the T-1 vertebrae and two ribs.

They had already set up my next appointment with a surgeon. That appointment was a month away. At that point, my wife began looking for an alternative that would produce a quicker response. She called the Cancer Treatment Centers of America where we got an appointment within a week. We had nothing to lose and made the trip to Philadelphia for an evaluation. We met a wonderful team of specialists who performed every test necessary to develop a plan of attack. We met with a pulmonologist, radiologist, oncologist, nutritionist, naturopath, patient advocate, navigator and all of their staffs. They performed a PET/CT, PFT ( pulmonary function test), biopsy, bronchoscopy, MRI, and more. Everything was ready in a matter of a few days and a plan was put in place. We went from a Wednesday at home with the devistating news of a lemon-sized tumor to the following Thursday having a plan in place. The tumor was determined to be inoperable due to its location and invasion of the spine and brachial plexus. I don't know where I would be if Susan hadn't made that call. What if I waited a month at home to visit that surgeon?

The plan was six weeks of radiation and chemotherapy. It was aggressive. The integrated care model provided a very tolerable treatment. There were ups and downs but I got through it OK. Side effects were as expected and described by the team.

Six weeks after that part of the plan was complete, I had another PET/CT to find out what was accomplished. There was still a bit of cancerous activity but much damage was delivered to that tumor. A second line of treatment was ordered that included six infusions of another chemotherapy drug and five sessions at CyberKnife of Philladelphia.

The next PET/CT revealed NO cancer activity at all. It was gone.Scar tissue is all that remains of that lemon-sized tumor. It has remained stable over 7 years. Some say it is cured although I am still a patient and survivor at CTCA in Philadelphia.

They have offered the opportunity to reach out to new patients. I take part in their Patient to Patient network. They call it the Cancer Fighter Care Network (CFCN). I have talked with well over a thousand people from every corner of the country who have been diagnosed with lung cancer. Every story is unique. The devastation is universal as it is with any cancer diagnosis. I've been able to offer a glimmer of hope through my story of survival. Every new patient feels the shock as I did. Having the "rug pulled out from under you" while you are living life, enjoying a career, having family and friends nearby is simply devastating.

No one "deserves" lung cancer simply because of a career choice or even that you may have been a smoker. Nearly 60 percent of new lung cancer cases are people who never smoked or quit long ago. We cannot turn the clock back and begin again making better choices. It's about what we do next that matters. Find the best options available regardless where that might be. There have been so many advancements in lung cancer treatments with genomic testing and immunology. There are many reasons to be hopeful about positive outcomes. I have met so many cancer survivors over these years. Their stories continue to inspire me to remain in volunteer mode. We have lost many of these new friends, I suppose that is what keeps me in this fight. I hate cancer, but I love the people.