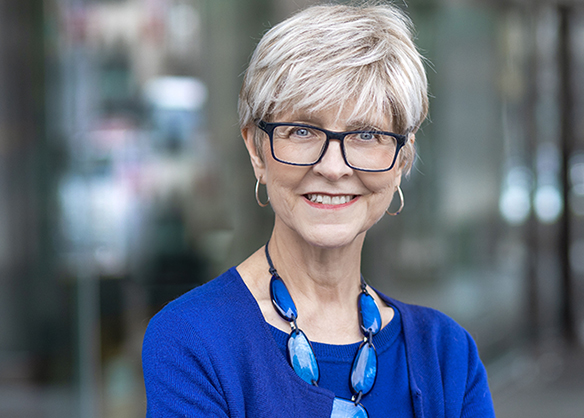 It is with heartfelt sadness that we acknowledge the death of Janice Nolen, the American Lung Association’s National Assistant Vice President, Policy. Janice passed away Wednesday, April 15, 2020.

For 20 years, Janice was a national leading voice for healthy air for the American Lung Association. In this role, she supervised the development of policy positions on indoor and outdoor air quality for the organization. She was a nationally recognized authority on air pollution and a sought-after expert by news outlets such as the Associated Press, ABC, CBS, NBC, Bloomberg, Forbes, CNN, NPR and others.

Janice represented the Lung Association with its many partners, including other public health and environmental organizations in addition to federal agencies, on policy and regulatory issues. Janice was the driving force behind the 21-year history of the Lung Association’s signature “State of the Air” report, which has drawn significant public attention to air pollution control challenges and successes across the country, as well as the growing threat of climate change.

She also directed the Lung Association’s actions in air quality regulatory advocacy and litigation. Her work in this area resulted in the strengthening of the national air quality standards for ozone and particle pollution. She led the National Radon Action Plan Leadership Council that developed the U.S. National Radon Action Plan to reduce radon risk in five million homes. She formerly served on the U.S. Environmental Protection Agency's Clean Air Act Advisory Committee.

Janice’s contributions to clean air and lung health are wide-ranging and span decades. She served as a member of the American Thoracic Society’s Environmental Health Committee. In April 2020, the California Air Resources Board honored Janice with the 2019 Haagen-Smit Clean Air award, known as the “Nobel Prize” of air pollution and climate science achievements. She was honored in the category of Education. In 2016, she was recognized with the American Lung Association’s highest staff honor, the Hoyt E. Dearholt Distinguished Professional Service Award, for her outstanding contributions to lung health.

“Janice Nolen was a passionate and influential champion of lung health,” said American Lung Association President and CEO Harold Wimmer. “She was a driving force in not only strengthening public health protections but also in shifting public opinion and awareness around key lung health issues. Her lasting contributions over the decades range from safeguarding the public from ozone and particle pollution and radon gas to the threat of climate change. She was well-respected and a dearly loved member of the American Lung Association family. She will be sorely missed.”

Prior to coming to Washington in 2001, Janice directed programs for the American Lung Association of Tennessee. There, she led the organization's air quality, asthma and tobacco control programs and policy implementation at the state and local levels. In 2001, the Governor appointed her to the Tennessee Air Pollution Control Board, the state policy and regulatory agency for air issues.

Before joining the American Lung Association, Janice spent ten years working with a regional council of governments in Tennessee on community and economic development and alternative transportation. She also served with the Environmental Planning Division of the Tennessee Department of Transportation. She held a Master of Arts degree from Middle Tennessee State University.

Janice is survived by her spouse Kenneth Rothbaum, M.D.

To honor Janice’s memory, the American Lung Association has created the Janice E. Nolen Healthy Air Internship, ensuring younger professionals continue the important work of protecting our nation’s air quality. If you would like to make a donation in memory of Janice Nolen, your gift will continue Janice’s legacy with this dedicated internship to mentor young advocates.