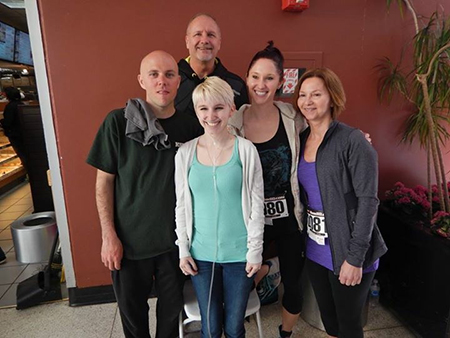 At the age of 4, I was diagnosed with juvenile rheumatoid arthritis. My parents and I were told that this disease generally presents itself in either of two forms: one that attacks primarily the joints or a systemic version that attacks the internal organs. While we knew that rheumatoid arthritis would present many challenges, we counted ourselves lucky that it appeared I had the presentation where it attacks primarily the joints. We didn't realize this would later take our journey down another path.

My childhood had its aches and pains. After college was when things really started to change. I was diagnosed with double pneumonia shortly after graduating. After recovering, I still had a cough that I couldn't shake no matter how many over-the-counter or prescription medications I tried, and while I was far from an athlete before, the shortness of breath was slightly more noticeable now. Because of this, we decided to follow up with the pulmonologist. When he saw my X-rays he uttered the first words that would start us down our new path: "This is not normal."

Blood tests, CT scans and a lung biopsy eventually confirmed a diagnosis of pulmonary fibrosis in 2011. My family and I later found out that rheumatoid arthritis caused my pulmonary fibrosis. I was shocked, but I was determined to see the bright side of things. We had a diagnosis and now could start on a path of monitoring this to hopefully prevent any further complications.

In August 2015, a routine doctor's visit with my pulmonologist confirmed that I was losing weight and my breathing tests were slowly declining. The first thing he brought up was that he wanted me to take a 6-minute walk test at the local hospital to prove that I didn't need oxygen. Great. I knew I was going to fail that and was trying to compose myself when he made a statement that stopped me in my tracks. "I think we should really consider the possibility of a lung transplant." I was floored. The next few days felt like an emotional blur.

I chose Columbia University Medical Center's Lung Transplant department. After more testing, I was officially admitted into the lung transplant program but not officially listed for transplant. We started another period of monitoring, going back to Columbia every four to five months dragging oxygen tanks with us to doctor visits or educational seminars about transplant, it seemed overwhelming.

My health was getting worse, so on Jan. 19, 2017, I was officially listed at Columbia University for a lung transplant, and on Feb. 5 I received the call that saved my life. I was being brought in for a possible transplant.

The next day, after waiting in the hospital for 16 hours, we found out that I was one of the lucky ones. No dry-run. This was it. I received a single left lung transplant. The surgery went smoothly and 10 days later I was walking out of the hospital to go home.

Since receiving my lung transplant, so many things have changed in my life. There is an entirely new routine complete with medications, additional doctor visits, new procedures to check on my lung to ensure it is doing well, and new precautions to try to prevent infections and rejection. While all of this seemed overwhelmingly terrifying when we first left the hospital with this precious new gift, the terror subsided over time and was replaced with boundless joy: the joy of being able to sing again, to be with my family, to plan for the future. I have never and will never stop thinking of my donor and their family. This selfless gift has given me a chance to "be Rachel" again and for that I can never truly express my deepest gratitude.