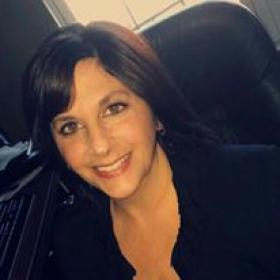 Last winter, I got a bad cold that just wouldn't end. After a few weeks of coughing nonstop and feeling awful, I went to see the doctor and I was prescribed antibiotics for bronchitis. A couple of weeks later, nothing had changed, so I did another round of antibiotics...without success.

By early March, I ended up in the hospital for pneumonia. Fluid was drained from my chest, but six weeks later I was back in the hospital to surgically drain even more. At that point, my doctor did a biopsy and realized the situation was more serious than he thought: the diagnosis came up cancer.

I was in the recovery room after the surgery when he told me I had stage IV non-small cell lung cancer. He said I most likely had six months to live. I felt groggy and not fully awake, so it took a while for the word "cancer" to sink in. I went home in shock; my entire family was shaken. This is never news you expect, especially because nobody in my biological family has had cancer and I've never even smoked a cigarette. My diagnosis came completely out of the blue.

People often ask me if I ever wondered, "Why me?" The way I see it, you can sit there and think, "How did this happen? Where is this coming from?" However, that doesn't resolve the issue. I decided to keep looking forward. I was really goal-oriented—I just focused on getting better.

A few days later, once I wrapped my mind around the idea that I had cancer, we began talking treatments. My oncologist started me on three types of chemotherapy drugs, but I did not fare well. I had terrible side effects and I just couldn't stay on the therapy.

I decided I needed a second opinion. I found a new oncologist who told me about more treatment options and worked to help me find the right one. He switched some of my chemo medications and the side effects were more manageable; however, we realized in July that the chemo wasn't working—my cancer was still progressing. That's when immunotherapy was introduced.

I'd seen commercials for immunotherapy, but never paid attention to them—you never think you'll need to know that information. But my doctor told me there was a new kind of cancer treatment that could help my body fight the foreign cancer cells. I didn't have anything to lose, so I said we should go ahead and try it.

I started getting immunotherapy infusions every other week. At first, it seemed similar to the chemotherapy process—you sit at a clinic for a period of time receiving the treatment. But immunotherapy takes just an hour, whereas the chemo took three and a half hours. And the biggest difference was the side effects. With immunotherapy, I have yet to experience any problems. It's fantastic. You're not putting harsh chemicals in your body—instead, you're training your body to fight the cancer cells. You're using your own body to fight this invader. It's empowering.

I was feeling optimistic about the immunotherapy, but then things got complicated. Just a few weeks after I'd started the new therapy, I began experiencing some strange symptoms. I had pain in my pelvic area and I lost the use of the entire right side of my body. My leg felt like it was wooden and my arm was so heavy I couldn't write. I couldn't even walk. I was terrified. I didn't know if these were side effects of the immunotherapy or if they were caused by something else, so I reached out to my doctor. We did a scan of my body and found out that my cancer had metastasized to my brain and fluid was pressing against my nerves, causing these complications. The doctor said the cancer must have spread before I started the immunotherapy, and I'd need to stop therapy briefly so they could perform targeted radiation and destroy the new tumors. I was scared, but determined to move forward.

After one dose of targeted radiation to the brain, the new tumors were gone and I breathed a sigh of relief. I started the immunotherapy again and have been on it ever since. Because immunotherapy is such a new treatment, doctors don't yet know when patients can stop receiving it. So for now, I stick to my regular routine—I get an immunotherapy infusion every other week, and I know my life will be like this for a while. But that's just fine with me, because it's working.

When I first became ill, I looked at the scans—my lungs were so covered in cancer that you could barely even see them. But when I had a scan earlier this year, it looked really good. The scans now show my lungs clearly because the fluid is gone and my lungs are expanded—as a result, the doctors were able to find one little cancerous area in my collarbone and two small nodules in the middle of the lung, so I'm receiving radiation to get rid of that. But I'm confident my next scan will be good. That's an amazing feeling.

Now, my cancer is just another chronic disease to manage. This year, my oldest son is graduating college and my twins are graduating high school. I'm grateful every day that immunotherapy is allowing me to watch my kids grow into young adults.

The immunotherapy gave me my normal back. I returned to work a few months ago and I'm back in my old routine. I'm an avid gardener, and I missed spring last year. I couldn't plant my garden or reap the rewards. This year, I can't wait to get out there and start digging in that dirt. I have cancer, but that diagnosis doesn't always mean a death sentence. For me, it's a chronic disease to keep an eye on. That's what I want other people to know—there's hope for cancer patients. If you don't like what your doctor tells you, get a second opinion. Not all doctors and hospitals are familiar with treatment advances, so do your research and find the right fit for you. I found doctors I fully trust; I know they're doing everything necessary to take care of me and keep me here to watch my kids—and my garden—grow.

This story was originally featured on HealthGrades.com.