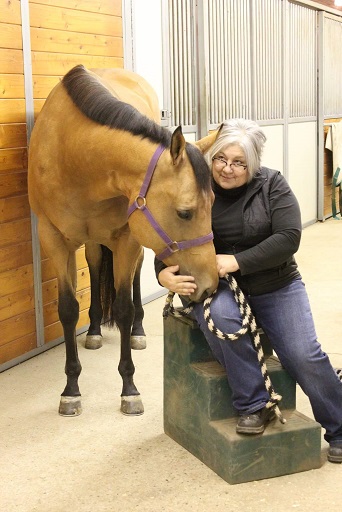 In 2010 my world came to an abrupt standstill. At age 52, I was told I had stage 4 lung cancer. I walked out of my doctor's office and threw my pack of cigarettes out in the parking lot. All I thought about was that my father had died of lung cancer and here I was following in his shoes. I smoked 3 packs of cigarettes a day for 30 plus years.

What to do next is a crazy process. After meeting with my oncologist and a surgeon, I was told that they would do surgery first, then if I made it through that, we would do chemo and radiation. The odds of making it through the surgery were slim I was told. I didn't think twice about telling them I was very head strong and had too many things I hadn't done yet. I don't think they believed how bull-headed I am. At the time of the surgery I told the surgeon I would see him afterwards. I also asked him not to mess up my tattoo.

On waking up the surgeon said "you made it." I told him of course I did; he told me he hadn't cut into my tattoo. I told him thanks. We had a good laugh. I think never having thought I wasn't going to make it through this and having a very warped sense of humor has helped me through being sick during the chemo and radiation. I had a fabulous support team of family and friends that kept me going when I needed an added push. I also had made promises to myself on accomplishing certain things. There are so many long term effects that are with you every day. 'Chemo cloud' as I refer to my memory not being as good as it was. The shortness of breath has been a huge challenge for me. Attending the Livestrong Program at the YMCA helped improve my activity level.

I found that through the process of dealing with the cancer, doctors and nurses, which take their jobs and your health very seriously, as they should, things and people get so somber and, at times, gloomy. This doesn't work for me. I need up beat off the wall people to interact with. If you happen to find yourself with this horrible disease, grab up all the people that will help you shine with good jokes, funny stories and a lot of smiles.

On top of this I was diagnosed with breast cancer in 2013. The radiation people read my lung cancer chart and told me the breast cancer would be a cakewalk compared to the lung cancer. I have been blessed with gathering people that have the ability to go along with my sense of humor and see that is the best way for me to deal with all this.

I'm still here 5-1/2 years later. Still have my warped sense of humor and bull-headed as always. It can be done. Never doubt how strong you are. Don't let negative people in your circle. I know my dad is watching over me every day. I get my sense of humor from him. He made sure I made it. You can too.