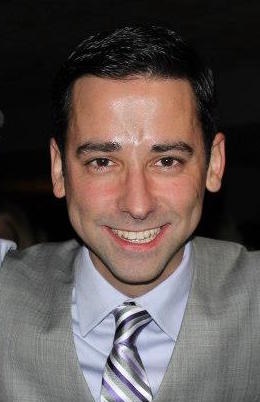 My name is Robert. I’m 43 years old, and in January 2019 I was diagnosed with stage four metastatic lung cancer. While I was as shocked as anyone who might get that news while living a relatively healthy life, I didn’t stop and ask, “Why me?” I know that is a common question for those diagnosed with any life-threatening disease, but I knew going into surgery that the pain I was feeling on my right side was either inflammation, infection, or a return of the cancer I’d fought and beaten nearly 30 years earlier.

In high school, I was diagnosed with Hodgkin’s Lymphoma, stage 2B. The plan back then was simple: eight months of chemotherapy and radiation and, with a cure rate higher than 90%, I should be able to weather the storm and come out the other side into remission. Since that time, I’ve kept up on visits with my oncologist, but that’s the thing about cancer: Sometimes it sneaks up on you and shows itself in a different area of the body. You just have to be ready to fight when it does.

Fast-forward to 2019, and here I am, battling again. However, this time there is no clear-cut answer as to when the battle will end, if ever. I’ve been getting treatment and following the doctor’s orders, but because the cure rate for this kind of cancer, given where it’s located in the body, is between 5% and 8% after five years of treatment, we don’t know if the chemo will kill the cancer, or simply stop it from spreading. As of writing this (October 2019), things are stable, and that’s all we can ask for at the moment.

So, what do you do with yourself when diagnosed with cancer? Well, that’s the thing. Once you get through the shock and depression of the diagnosis, you just have to go on living. You want to return to work as you feel up to it; you want to get home and be in your normal surroundings; you want to walk the dog or play with the kids; you want to live. Certainly any disease like cancer will throw a monkey wrench into your life. Some of your hobbies may be taken away from you; the pain and exhaustion will be intense at times; you’ll miss work and family events when you’re just not up to it; and you’ll get moody and impatient with people, even your loved ones when they’re trying to help. For me, it’s been a mixed bag of all of the above, but doing my best to keep a positive mind frame, even when I’m in a particularly bad mood (ESPECIALLY when I’m in a particularly bad mood) is key.

Lucky for me, I have an incredible support system. Between my wife, family, friends and co-workers, it’s almost been inspiring going through this ordeal. Somehow, cancer brings out the best in people. I know that may sound strange, but it’s true. And it’s more than just someone sending a card or a thoughtful text. I’ve had some of my closest male friends – some I’ve known since childhood, some since college – who have told me they love me. That’s not an easy thing for a man to say to another man, and really mean it. At work, where I had played softball for the company team, which won the league championship as recently as last fall, my teammates and other co-workers created a patch they had sewn onto the right sleeve of their jerseys, which reads, “Warriors Never Quit.” The image on the patch is of a guy throwing a slow pitch in softball, and I’m telling you, the silhouette looks exactly like me pitching. When the marketing department and my teammates surprised me – all wearing the jerseys as they gave me my own – on a random Tuesday, well, that’s exactly what I’m talking about when I say that cancer can bring out the best in people. They made me feel loved and important, and hey, who doesn’t like that?

For now, we continue to fight. While the battle against cancer or any disease can feel like a lonesome road – because really, all the support in the world doesn’t take away from the fact that it’s you (or me) going through it – there’s no way I would be where I am some 10 months in without the people who care for me. None of us knows how long we have in this world, and what we cherish the most can be taken away from us at any moment. So it’s important to live each day to the fullest and get something out of your time here on this planet. When you’re diagnosed with a disease, you just have to keep going, but be sure and do the things you’ve been putting off: take up a musical instrument, plan that trip to Europe, start those books you never got around to reading. Just live and the rest will take care of itself.