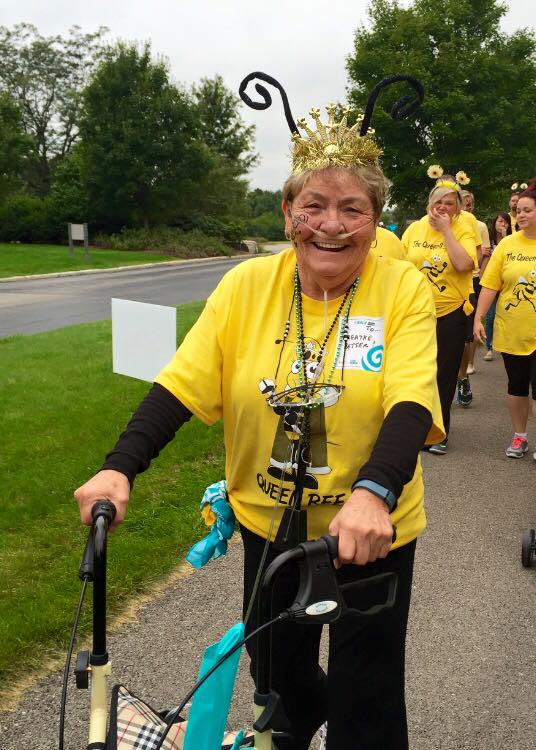 Hi, my name is Maureen and I am the face of a lung cancer survivor! I'm from the generation when the world was rebuilding after the war. Everything was wonderful, celebrating in untold ways! Cigarettes were part of the celebration. It was cool to smoke (even doctors did it). Little did we know the devastation it was going to cause. I'm not putting the stigma of smoking as the only cause of lung cancer, but it sure was a big part of my mine. Yes, I was a smoker! I've also known people that NEVER smoked a cigarette in their life who developed lung cancer, so it became apparent that this disease shows no favorites!

My personal story is the same as many. It was April, 2014, and my journey started with a persistent cough. I thought it was bronchitis as it seems everyone I knew were developing some sort of respiratory something or the other. I am, to this very day, grateful that my doctor's office "squeezed" me in to have a "look/see"! Everything appeared normal so cough medicine was going to be the miracle cure! As I was leaving my appointment, the doctor said, "you haven't had a chest X-ray in awhile, let's schedule one so we have the results on file." And with those 18 words, BAM, my life was changed completely!

I went immediately for the X-ray thinking that was that! Got a call the next morning saying the results were "inconclusive" so my doctor decided to order a CT Scan. I believe I had that on a Thursday and by Friday the results were in! I was on my way home from work when my doctor called. Missed the call because I was driving. Decided to pull over and call him back. He delivered the news that a nodule was found and it was spiculated (irregular in shape), which makes it very suspicious for cancer! When I asked him if it was a death sentence, he said probably not, but it could be! I hung up and had my own little pity party on that side street. Made the decision not to tell my kids (they both had out of town plans), and stay home and seriously think about all the "what ifs". What if it's "bad cancer"? What if I need surgery and chemotherapy? What if I lose my hair and finally, what if I die! That thought snapped me out of it. I was not ready to die. I decided not to hide from this disease and face it head on with every ounce of energy that I had. It felt like a weight lifted off of me. On Monday I told my kids. We cried, we hugged and we decided that, yep, I was gonna beat this. We read everything we could find, found a marvelous team of doctors, and my own personal "lung advocate", Juli. To make a long story short, I had the surgery in June, and started chemo in August. (I became violently ill, so since it was mainly for preventative measures, they decided the "cure" was worse than the illness and I only had one treatment). I went to pulmonary rehab, in October and worked my butt off, and finished my 36 weeks feeling like a million bucks.

I am the product of early detection. That is key! However, the best prevention is abstention from inviting carcinogens into your body. This, as we all know, is almost impossible to do. Thank God the American Lung Association is bringing this to the forefront, to help find treatments to ease the pain of this killer disease. I walked, along with 30+ friends, and known as The Queen's Bees, the Lung Force 5k in 2015 (with a little help) and in 2016, I walked all three miles unaided, to help raise the funds necessary to discover and research these drugs and treatment that is necessary to achieve this. In all our team raised more than $10,000 in those two years. I will also be representing the State of Illinois in Washington to ask our congressmen and senators for additional funding for this disease.

I consistently go for follow up appointments, scans and blood work. We are coming up on three years since my diagnosis, and I am thrilled to say that I have been cancer free for two and a half years now. My family and I have made new friends and found a new purpose during this time. We try to volunteer for the events that Lung Force and the ALA host, as well as take part in the annual LUNG FORCE Walk and attend any seminars we hear are in the area. We tell everyone about our journey, hoping that it helps save someones life with early detection!