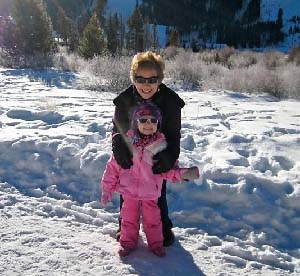 My name is Mara and I live in Colorado. I retired from being a high school educator in 2010 and moved immediately to where a former youth group boyfriend of mine lived. I thought it was like an Oprah Reunion story. I had my fairy tale world by the tail and I thought I'd died and gone to heaven!

Well, last winter of 2015, I'm hiking and snow shoeing and thinking my extra huffing, puffing and shortness of breath was just due to my being a bit out of shape. I also was going to a chiropractor who perhaps misdiagnosed some symptoms, but added to the breathlessness came chest tightness. I did a diligent amount of internet research and I told my PCP that I probably had adult onset asthma. After all, the symptoms are the same, right? At that doctor's appointment, I learned that I had a grapefruit size mass in my right lung. I had a CT scan done and saw a critical care pulmonologist and had that lung drained with the understanding that the fluids would be tested. I soon learned that I had adenocarcinoma and it was stage 4 and I had 1-2 yrs. to live. What in the world is adenocarcinoma anyway and who is this thoracic surgeon telling me that it probably had spread to my brain and other major organs already! After a MRI and pet scan, we knew he was wrong about last that part thank heavens.

I had a successful, corrective surgery performed a couple of days later to help keep my lung from collapsing and filling up again. Chemotherapy began in May and I'm currently on a maintenance regimen of Alimpta and Avastin. Well, this brings me to the present. I feel good, volunteer a lot, travel and look forward to enjoying my 2 precious grandchildren for a few more years.

I was diagnosed exactly one year ago, so tomorrow begins my living on borrowed time.

So this is what stage 4, incurable cancer looks like. The medical community refers to us as survivors because we are living with this, but we would love to be actual survivors! With your help and support, we're getting closer to the day where the single digit 5 year survival rate is just history.