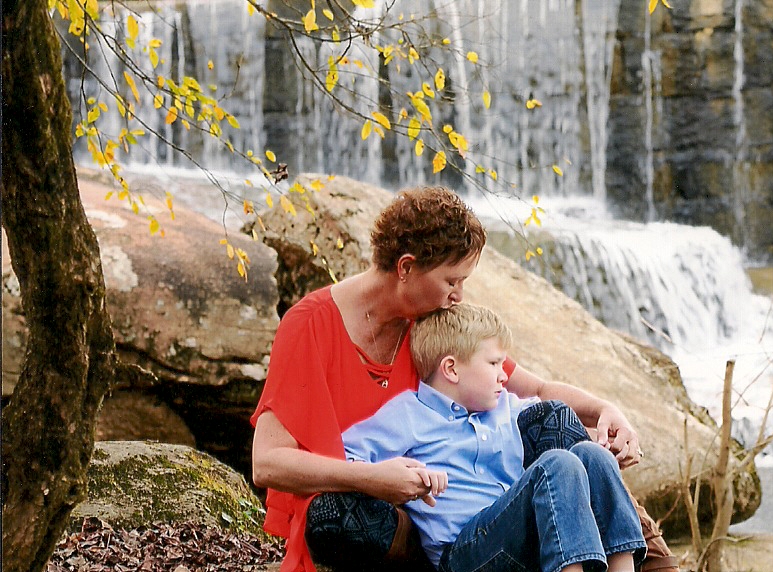 My face is the face of stage 4 lung cancer. This picture depicts the deep love I have for my only child, gifted to me by God just six years ago. Can you imagine how deeply my life was changed when I found out in September of 2016 I had lung cancer? How was I going to tell this sweet boy that his mom had cancer? Would he ever fully understand? Why is this happening to me and this child I carried in my womb after being told I'd never have children? My story doesn't end there...my fight for my life and my health begins. My ever deepening love for God and trust in his healing power sustains me.

When I was diagnosed originally, they staged me as 3B. There was a lymph node that kept lighting up in my neck that my surgeon dismissed. I kept asking...I was set on a course for surgery to remove my upper right lobe and the one lymph node they knew was involved. I had a scan of my brain that initially showed things were clear. However, just before my surgery I was feeling "different" in my head. Although my surgeon stated in a message to me, "I highly doubt it is related to the cancer", he agreed to another scan of my brain when I was there for pre-op workup. It was then I became stage 4. After being told I would never have had symptoms from a "lesion that small", I silently disagreed. My body is speaking to me. My God is speaking to me and I will listen.

My family, friends and church family have been very supportive. Even my mother and father came 1,000 miles to support me and help any way they could. Little did we know, that as we agonized as a family over my diagnosis, my dad would receive the very same diagnosis in April of 2017.

Since I was no longer a candidate for surgery, I had a six-week chemo and radiation regimen in February and March of 2017. When my dad was diagnosed I wanted to be there for him for his sixth week of treatment knowing how hard it is. I planned a trip "home" for that period of time. It was late May of 2017. My dad suffered several setbacks to his health and decided not to fight this horrible disease. My two sisters and I spent precious time with him in his last days. He passed into the arms of Jesus on June 2, 2017.

My two beautiful sisters decided to be proactive and get a scan of their lungs. My youngest sister's scan was clean - praise God. My other sister, just four years younger than me, had a small spot show up on her scan. She was diagnosed with multi-focal adenocarcinoma (lung) in situ. She had those spots removed in December of 2017. The doctor declared "this is the best news you can get."

Although I am still fighting, and my dad has lost his life, I believe due to early detection, my sister was blessed by early diagnosis and intervention.

I haven't given up, I won't give up. I will fight for my life and for the lives of others. Not only is the birth of my son a testimony, God is working yet another testimony in my life...one of healing and trust in Him! I feel great!

I cherish the times in life that I am so wrapped up in the experience of living that I momentarily forget my diagnosis. I am a fighter, I am a warrior, I am a daughter of the king and despite all the heartache and uncertainty I am blessed! We must unite to fight this horrible disease. Although my sisters and I are non-smokers and my dad was a smoker, NOBODY deserves to die. I am currently on a journey of healing. I don't know whether I will be healed THIS side of heaven or if God will take me HOME to heal me. I strongly believe I will be healed THIS side of heaven.

Either way, I win.