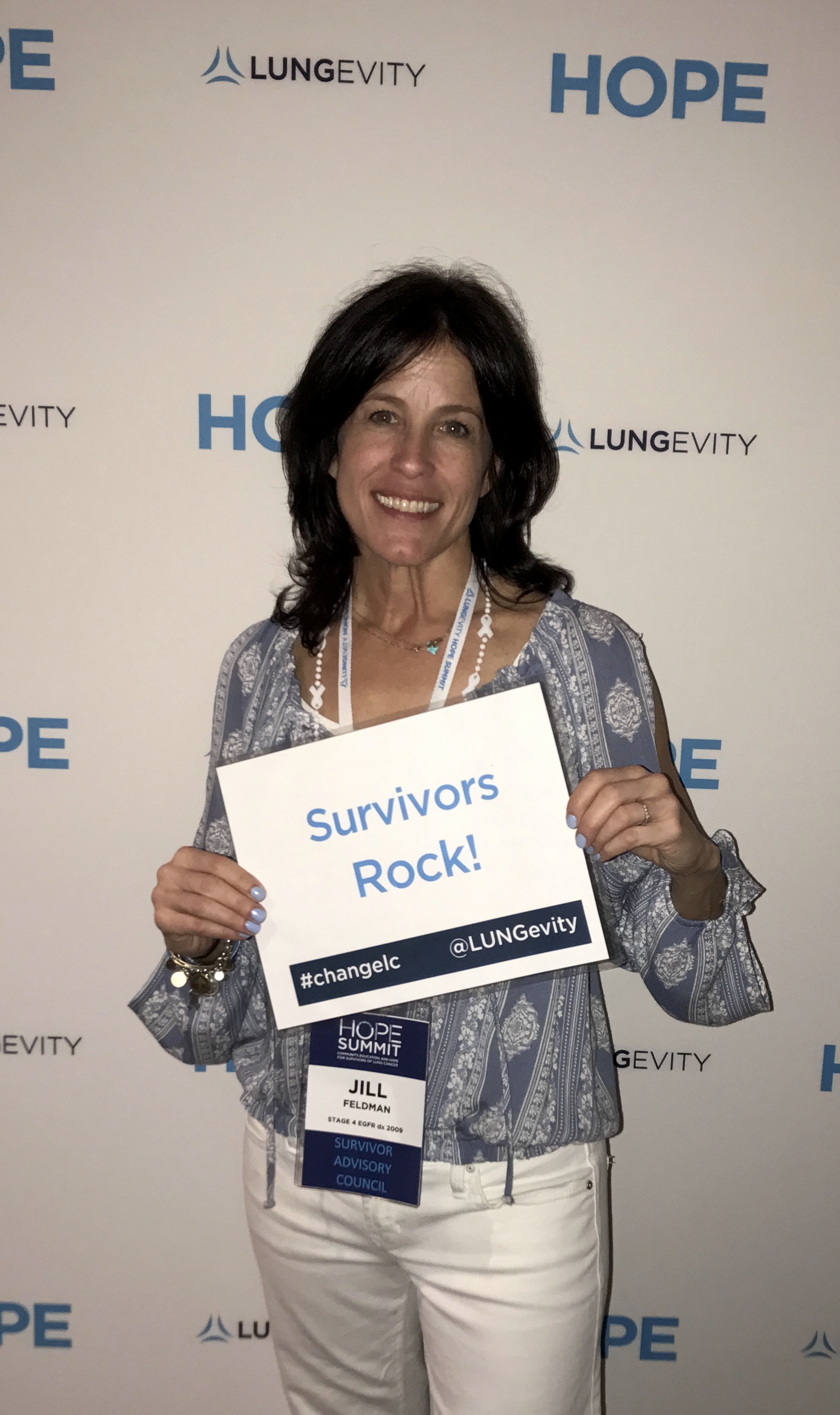 I lost five family members I loved dearly to lung cancer. So young – pretty incredible, and heart wrenching! I found myself bitter and angry after so much loss. Coincidence or fate, we had just moved from Chicago to the suburb of Deerfield and the LUNGevity Foundation had just gotten off the ground. LUNGevity was founded by seven Chicago-area lung cancer patients who were determined to provoke change while fighting for their lives. My involvement gave me some control over the disease and has been a vehicle for me to redirect my negative feelings into action.

The other control I had was to be my own advocate; I didn't want my four kids to ever go through what I had gone through so I began having scans when my mom was diagnosed. All was good until 2009 when the unthinkable happened and I became the patient. Considering my intimacy with lung cancer, and being president of LUNGevity at the time, the irony of being diagnosed at 39 years old with the same disease that I literally watched kill both of my parents, and so many others I loved, is still surreal.

Thankfully it was caught early, I had surgery, and I was considered cured. In 2009, molecular testing was becoming more common, and at the time there was some excitement around using erlotinib as adjuvant therapy for the cell type of lung cancer I had. My kids were 6, 8, 10 and 12 at the time. I needed to be able to look them in the eyes and know I did everything in my power to fight this disease, so I went on erlotinib for a little over a year.

I was prepared to be the poster child for early detection, the story of hope; hope that lung cancer patients and their families desperately needed. Never did I think that the lung cancer would return and I would have another surgery two and a half years later. And I certainly never imagined that only a few months after that my diagnosis would drastically change and my mentality would have to switch from cure to manage. My poor family. How many times does one family have to helplessly watch lung cancer physically and emotionally destroy someone they love? And my kids… What does this mean for them? I felt defeated and frustrated. It took some time, but I had to reframe my thinking and realize that I am still a story of hope!

While early detection didn't result in a cure for me, my stage 4 cancer was caught early. I know that sounds like an oxymoron, but it makes a difference, by not only extending my life but the quality in which I live it, because we can 'manage' the cancer as a chronic disease, at least for now. When the cancer returned, immediately following my second surgery, many were in favor of me starting erlotinib again, but my health care team and I decided we would manage the cancer by treating unruly cancers locally, with Stereotactic Body Radiation Therapy (SBRT) for as long as possible. It's been life-saving in so many ways and it has allowed me to prolong going on systemic therapy for the past three and a half years, and hopefully for a long time coming.

This is exactly what I mean by being able to manage the cancer as a chronic disease, for now. My dad died three months after his diagnosis and my mom died six months after her diagnosis. I can only imagine how different it may have been if they had targeted therapies like erlotinib and targeted radiation like SBRT. My dad may have lived a few more weeks to see me graduate 8th grade, and maybe my mom would have lived six more months and been there for the birth of my daughter. Those are the treasured milestones that were stolen from my parents – and from me. I have non-small cell lung cancer and the cancer tested EGFR+ del exon 19.

The cancer is incurable so there is no magic bullet, but I am fortunate that the cancer is contained to my chest, for now. I am grateful for SBRT, the newer targeted radiation, and hope to be able to use it for a long time. Hope is a word that I never used to associate with lung cancer because in my experience there was only false hope, or no hope at all. But thanks to advancements in research, more and better treatment options and an increase in advocacy, I have hope. The hope I have is real because I can now recognize that hope is relative. I now think and believe that hope means so much more than simply a 'cure' for lung cancer. And, because of that hope, I am confident that I will be here for my children, and important milestones, for many years to come.