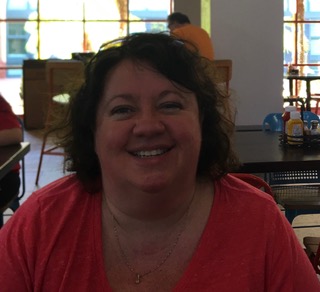 My name is Jen. I am 44 years old and was diagnosed on April 13, 2018 with Stage 4 Lung Cancer. To say that this was a shock is an understatement as I have never smoked a day in my life.

Unfortunately, like many non-smokers that are younger that get diagnosed, the symptoms did not develop until I was already at stage IV. For years I had a chronic cough that we treated as Bronchitis or a respiratory infection but because of my age, they did not feel like I needed to get a chest x-ray. I am a nurse and I look back and think how did I miss the signs and symptoms. Again, I go back to my age and being a non-smoker. I never thought this could or would happen to me.

My first symptoms that something was not right was I had terrible neck pain that if I moved my head a certain way, I had pain that would go from the top of my neck up to my head. After X-rays of my neck, I ended up going to a friend that was a chiropractor to see if that could relieve the pain. After 2 weeks of treatment with no relief, he sent me for a MRI of my neck. That night I got a phone call that no one ever wishes to get. My primary nurse practitioner called me to let me know my neck was fine but they saw a potential mass in the base of my brain and I needed to get a MRI of the brain. The next day, the MRI of the brain showed I had 4 different lesions in my brain and all the pain I was experiencing was due to the swelling I was experiencing in my brain. I was sent immediately to the emergency room for IV steroids to reduce the swelling and to be admitted to the hospital knowing that moment that my life and the lives of my family would be forever changed.

The first thing my oncologist told me was to not look on the internet at the expected life expectancy and to wait till I knew exactly what kind of lung cancer I had and what kind of treatment I would be having. After many tests and biopsy I was diagnosed with primary right lung cancer, non-small cell adenocarcinoma that had spread to some lymph nodes and brain – stage 4. It was recommended that I get radiation immediately to my brain with the use of Cyberknife radiation. I had a total of 4 treatments to treat the brain masses. Once my lung biopsy came back, my lung mass reacted positive for the PD-L1 marker which meant I could receive immunotherapy. I was started on every 3 weeks of IV treatments only shortly after I completed my brain radiation treatments. A miracle occurred that in 6 months since beginning treatment, I no longer have any active cancer that showed up in my CT scans, MRI of the brain and PET/CT scans.

I lost my hair in all the 4 spots I had brain radiation that has since grown back. I think that was one of the hardest days for me when it was about a month after I had brain radiation and I took a shower. While washing my hair, that is when the clumps of hair started to fall out. I had long hair at the time so I went straight to the hair dresser and got a shorter hair cut style so it would not be so drastic each time I brushed or washed my hair. I do have some side effects from the immunotherapy but overall I am doing and feeling great. The current treatment plan is for me to continue receiving medicine for 2 years after I have clean scans. October 2019 was my first year with one year to go as long as I maintain no evidence of active cancer. I am so grateful for the new research and technology that is coming forward all the time to treat cancer.