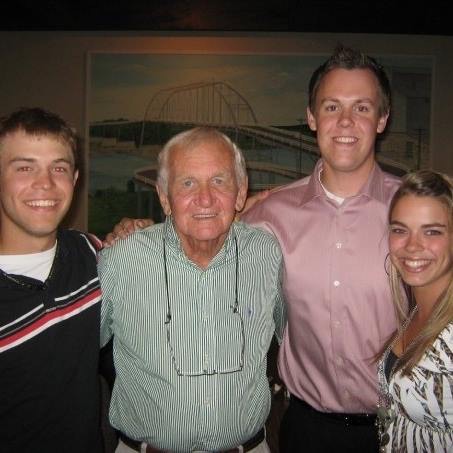 In January, 2005, during a pre-surgical exam, a chest X-ray revealed a spot on my dad's lung. It was lung cancer and he had a lobectomy. My dad was 76 at the time and was a vibrant, active guy. He was a character: a marine, very athletic- he was on the first hockey team at a Minnesota high school, an avid skier, had a breakfast special at a local restaurant named after him and was just an all-around great guy. He was not a smoker and had never really been sick.

Waiting for the results from the surgeon was agonizing but we were elated when we found out that the cancer was contained, and wouldn't need any further treatment. I can remember sitting there with my mom and dad in disbelief at what we heard. The surgeon was also very happy because it wasn't often that he got to share such great news. We were so blessed to hear this news and had a celebration!

My dad had to go to the oncologist for follow up every six months and then annually. We celebrated each day. During the next five years we all hugged a little tighter, made more time for each other and started a tradition of spending a week together at a cabin. In June, 2010, my dad was five years cancer free and considered cured. We were so grateful.

In January of 2011, my dad's blood pressure soared for no apparent reason and he was hospitalized. After many tests it was discovered that the cancer was back at the primary source- his lung, in some lymph nodes and in his bones. This time it was Stage 4, NSCLC -Adenocarcinoma and didn't have any mutations. We were in disbelief.

My dad agreed to be part of a clinical trial and started to receive chemotherapy. After the third chemo session he experienced many side effects and became very weak. It was hard to witness what was happening right before our eyes. My mom, sisters, friends and relatives all rallied to do whatever it took to support him. Looking back on it, it was as if time was suspended as he continued to try to fight. While there were ups and downs during the time, on Dec. 14, 2011, at 2:50 pm, my dad passed away at the age of 82, at home, as he wished, with everyone there. The heavens opened up and it started pouring rain.

We established an annual scholarship in my dad's honor for talented hockey players that also exhibit outstanding leadership skills at the high school he graduated from. We signed up for the Fight for Air Walk the following summer and continue to do what we can to support the work of the American Lung Association and LUNG FORCE. We will continue to honor my dad through our involvement in doing what we can by donating, volunteering and helping to raise money for awareness, screening and research - for a cure.