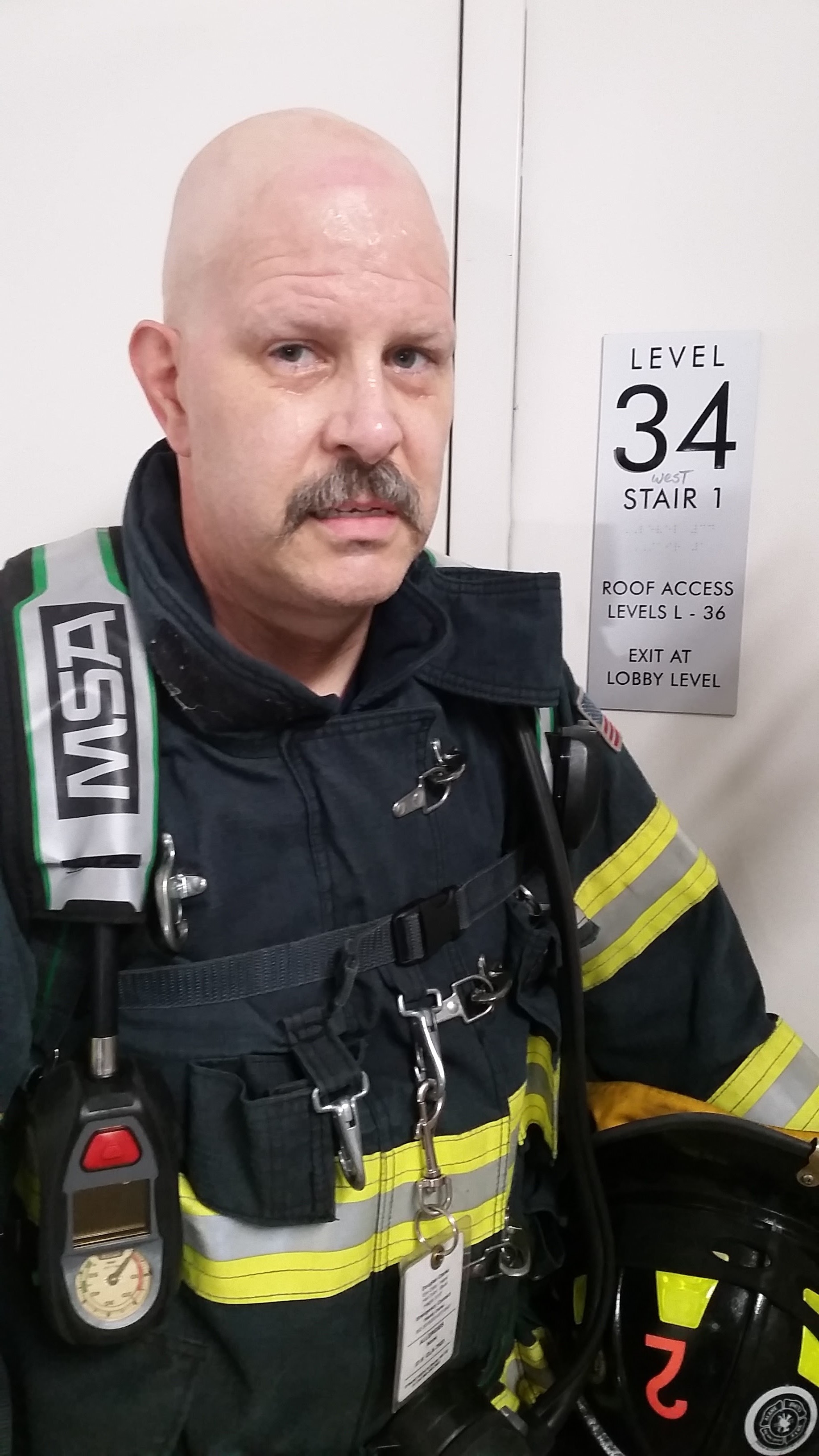 I participated in the 2016 Fight For Air Climb – Hartford on Saturday April 23 as a firefighter. Our team finished as the Fastest Team and I tied a team member as the 5th fasted member of our team with a time of 9:44 for the 34 floors and 688 steps.

My celebration was shortened by my need to skip the post climb event and attend a memorial service for a former co-worker that had passed away after her fight with lung cancer. This was my first exposure to a non-smoker to have died of this disease. That evening our fire department responded to a fire on the roof on a roof of the tallest building in our town. As a member of the truck crew, ascended the hundred foot ladder with my bunker gear, air pack, and a set of tools (about 80 pounds of extra weight). My legs had been taxed, but my lungs (breathing) were fine.

By the middle of May, about six weeks later, I had some difficulty on going on one of my normal walks with my wife just walking up our steep driveway. My breathing was challenged and my lungs were a bit sore. Over the next few weeks I began having more difficulties and eventually visited a doctor. The original diagnosis was pneumonia. After not improving with the prescribed treatment, a chest x-ray was done and the course of medication was increased to deal with the 'pneumonia'.

With still no improvement, my primary care physician then arranged another chest x-ray and some blood tests. When another course of medication did not provide appropriate results, a meeting with a pulmonologist for testing followed. That brought my next stops for a CT scan and a bronchoscopy. Four days later my diagnosis of small cell lung cancer was made. I met with my medical oncologist that afternoon and started chemotherapy exactly one week later.

The cancer was in the right lung and lymph nodes to the center of the chest. Over the next six months I went through six courses of chemo (three days each). Chest radiation was done for 35 days concurrently starting with the fourth course of chemo. I was not able to return to work due to the effects of the treatments. I was blessed that my employer and brothers/sisters in my school system supported me in my struggles.

After I have recovered from the initial treatment regimen, I had prophylactic cranial irradiation to minimize the chances for the cancer to migrate to my brain. When I was first diagnosed, not joining the 2017 Fight For Air Climb was never an option. I was determined to be there for the climb. I signed up for the 2017 climb the week I found out that I was now someone that I could be climbing for. After my scans earlier in the year had been clear, I discovered a lump in April that was diagnosed as metastasized small cell lung cancer. I was placed on a course of two immunotherapy treatments initially and the results showed enough improvement that I will be kept on a maintenance course of just one treatment.

The 2017 climb was successful and I completed it as first-year survivor. I along with my amazing wife Wendy are training for the 2018 Fight For Air Climb on April 21 of this year and plan to continue our personal fight with lung cancer as well as the fight to help others facing lung disease.