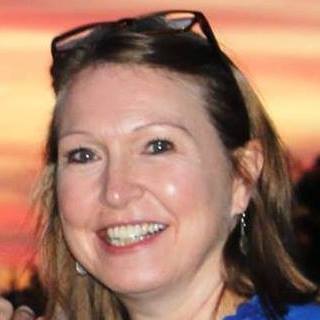 My journey began in the fall of 2015. In September, while vacationing in Colorado, I completed a difficult rated hike. It was my first time at such a high altitude and I was nervous, but I didn't have any problems completing the hike. The next month, while preparing for our big annual Halloween bash, I noticed I was getting fatigued much easier than usual but just wrote it off to being too busy.

In November I went to the doctor for allergies and a cough and was given an inhaler for the first time in my life, but it didn't help. In early December my cough continued and I was diagnosed with pneumonia and given antibiotics. A month later at my follow up appointment for the pneumonia I felt run down and was in pain from coughing and had lost eight pounds. A repeat x-ray showed no improvement so I was referred for a CT scan. The CT scan showed a mass in my left lung, so a PET scan was ordered. The mass in my lung lit up on the PET scan along with a lymph node under my right arm.

After having biopsies of both the lung mass and the lymph node it was determined that I probably had stage 1 or 2 lung cancer because the lymph node tested negative while the lung mass revealed non-small cell adenocarcinoma. All tests pointed to the probability that the cancer had been caught early and could be surgically removed by removing the lower lobe of my left lung or possibly my entire left lung, but during the surgery the surgeon discovered multiple pleural nodules. That is when my diagnosis became stage 4 lung cancer. The cancerous nodules had not shown up on my CT or PET scans so I was shocked to hear that I had stage 4 lung cancer. I learned from my oncologist that PET scans are not cancer scans like a lot of people think. They are metabolic activity scans and the nodules were too small and did not have enough metabolic activity to show up.

All too often lung cancer is advanced before it is diagnosed because the symptoms are so ordinary and subtle. I wondered how I, a never smoker who was active and ate healthy, could possibly have lung cancer. I'm the type of person who craves information, the more the better, so I began to do my research and learned very quickly that lung cancer is not just a smoker's disease as I had previously thought. Lung cancer affects both men and women, smokers, former smokers and never smokers. The real shock for me was when I learned how many young people in their 20s and 30s are being diagnosed with lung cancer.

Lung cancer does not discriminate. If you have lungs, you can get lung cancer. That's why I feel it is so important to raise awareness. The statistics are grim for stage 4 lung cancer, but thanks to research there have been amazing advances in the treatment of lung cancer in recent years. I am alive today and thriving because of research and I hope to help change those grim statistics. My lung cancer medicine is a targeted chemotherapy that targets the specific genetic mutation of my cancer. If I had been diagnosed just a few years earlier, my story would be very different than it is today. Currently there is no cure for stage 4 lung cancer, but with continued research and discoveries my hope is that one day there will be a cure.