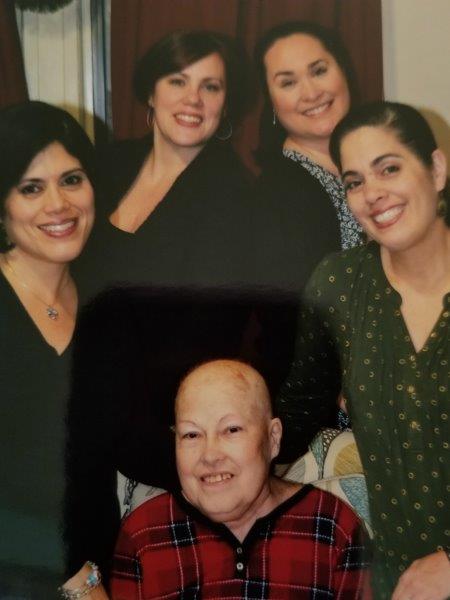 Our story began in July when our feisty mother became out of breath while babysitting her youngest grandchild. Mom made a doctors appointment and went in for some blood work and other tests. On August 3, mom was diagnosed with lung cancer. While we were not surprised this was a diagnosis for mom because she smoked practically her whole life we were still very optimistic because mom is a fighter in her daily life...we got this.

Two weeks later we found out it metastasized to her brain, pancreas, femur and ovaries and we started to worry. I remember sitting with my mom in the kitchen and asking mom, how do you feel about this diagnosis. She said, "Dineen, what can I do? It is what it is and I will fight, I just hope you all never forget me, I know I raised 4 strong woman all I want is to make sure my man (OUR DAD) will be OK."

On August 28 we started 10 straight days of brain radiation -- she did great. She started losing her hair and video messaged me to show me how much was falling out. I started to cry because my mother who was a beautician for many many years and had such fiery red hair was going to be bald. She saw me crying and she says, "Dineen, IT'S ONLY HAIR, IT WILL GROW BACK." After the radiation was done, about two weeks later, we started chemo. Mom was AMAZING and so strong through this whole process. We went through two cycles of chemo-which were three straight days of chemo with 21 days between them. We were going to go for the third cycle however by this time mom was already very weak, in a wheelchair, she was unable to walk to the bathroom on her own. So we decided on the day she had her appointment to start the next cycle we (the whole family) was going to go ask for answers.

You see during these last few months dad never asked for a prognosis -- I think he was unable to face the answer he knew he was going to get, but she was getting weaker and we saw the cancer was not allowing her to fight anymore. Friday, November 17, we sat with the doctor and he told us that the chemo had not done anything for mom in fact it metastasized to more places. I then decided to ask the question in front of my three sisters, my aunt and my father that we have never had the courage to ask. How long? His response was a couple of months to weeks.

Mom passed away the following Friday, November 24 at 8:55 a.m. surrounded by her husband of 43 years, her youngest sister, myself and my youngest sister. Once mom was diagnosed I needed to take initiative and make as many memories as possible. I scheduled two family photo shoots, we also decided on a early Thanksgiving (one week earlier) because we saw she was becoming weaker and wanted the family to come together. My sister was walking mom back home from Thanksgiving dinner and she said, "I will always remember what you guys have done for me." And that brings me such peace. Today makes four weeks she is gone and I miss her more than anything in the world.