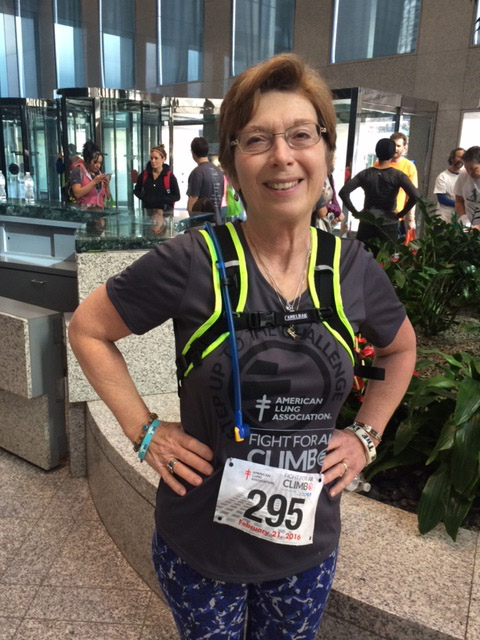 As a teacher of French, English and Interdisciplinary Studies for 40 years, I had always been very energetic and youthful in my teaching of high school students, taking them on field trips overseas and closer to home. We camped, we trekked, we saw the world. No matter my age, I had always had the energy and enthusiasm to get students out of the classroom to experience the world and bring it back into our lessons. This kind of experiential, hands-on learning was very important to me and helped create a very successful learning laboratory for my students.

In the fall of my 40th year of teaching, I took a group of writing students to a nature learning center on the Poudre River in order to help them develop their powers of observation for creative, descriptive writing they would do later in class. Even though the terrain was relatively flat, I was unable to keep up with my students and found myself constantly out of breath. At age 62, I just assumed that my decrease in energy and my shortness of breath, were just signs of aging. I had always been a very active and healthy person, and yet, that day in October, when I could hardly keep up with my students, I knew I needed to see a doctor. This seemed so out of the ordinary for my normal - leading with energy and enthusiasm, being "out in front" of my students, to motivate them to be their best.

After two months of careful observation by my family physician, then a pulmonologist, and ultimately an oncologist, with X-rays, CT scans, and pulmonary function tests, during which time I lost weight, developed a pronounced cough and sputum coming from my lungs, as well as continued shortness of breath, we finally scheduled a biopsy. Indeed, I was diagnosed with non small-cell adenocarcinoma (NSCLC); it looked like Stage 4, since in addition to the small tumor in my right lower lobe, both lungs had the appearance of ground glass, a spiderweb-like type of effusion that appeared throughout both lungs on my CT scan.

After the 'normal' round of PET scan, MRI on the brain to determine any spread of the cancer, which thankfully there was none, my local oncologist recommended me to University of Colorado Hospital, Anschutz Cancer Center to see a specialized lung oncologist, Dr. Ross Camidge. By the time I was able to see him it was a week before Christmas, and of course, medical schedules understandably begin to slow down as the approach to the holidays finds people turning away from work toward their personal lives. Dr. C. was adamant that we could not make or begin any sort of treatment for this lung cancer until my tumor was retested. We did schedule a second biopsy for right after the first of the new year in order to get enough tissue to do genomic, cell mutation testing of the tumor to find out if I had a particular mutation for which there might be targeted therapy.

At the time, it seemed that the wheels of medicine turned so slowly, having to wait during the holidays for another biopsy, and then afterward wait another three weeks for the results of the genomic testing. I impatiently just wanted to get started on any kind of treatment. I was ready, but Dr. C. knew we needed to have a more complete analysis of the tumor's genetic make-up. In retrospect, and when I speak with people who have been diagnosed with lung cancer, I know and affirm that this is the best way to proceed with lung cancer, prior to making and starting any treatment plan.

In the meantime, only days before Christmas, I received a call from Dr. C. telling me that two doctors on my tumor board recommended that I stop taking a drug I had been on for 8 months, an antibiotic, Nitrofurantoin, to treat chronic urinary tract infections. It was known not to be good for lungs, especially when taken long-term. Of course, I did what I was told; I was willing to do anything.

Cancer brings such fear and such a sense of isolation that we become very dependent on the medical community. And of course, I knew at the time that the prognosis for Stage 4 lung cancer was not good, with a very high mortality rate in very little time. I have since come to recognize that we are not statistics, we are unique individuals, and that we must see and treat each case of lung cancer individually and that there is hope for each individual patient. Yes, statistics show that lung cancer is the number one cancer killer, and yet as treatment advances are discovered by dedicated research scientists and doctors, people are surviving and living with lung cancer longer all the time. There is hope!

And yet, we need more money for lung cancer research, a cancer for which there is a prejudicial stigma due to its relationship to smoking, and therefore not so 'popular;' when it comes to funding. Victims of lung cancer are often seen as having caused their cancer. And why should that be? It shouldn't matter! As our lung cancer community knows well, so many people, young and old, men and women, are diagnosed with lung cancer, even though they have never smoked or quit smoking long before their diagnosis. Anyone with breasts can get breast cancer, anyone with a prostate can get prostate cancer, and anyone with lungs can get lung cancer! That's all of us and we need more funding to eradicate this disease!

Long story short, or not so short.....After I went off the Nitrofurantoin, I had an entire month until I was to get the results of the genomic testing on my tumor and have another follow-up CT scan. In late January, about 7 weeks after my initial Stage 4 diagnosis, I was beginning to have more energy, had less of a cough and lung sputum, was not so short of breath, and my CT scan seemed to miraculously be almost normal as the 'ground-glass' effusion in the lungs was almost gone, with only the tumor left in the right lower lobe. Dr. Camidge was amazed, my husband and I were ecstatic!! Instead of Stage 4, I got the opportunity that anyone who has ever been diagnosed with lung cancer would want. I was now a candidate for surgery rather than any treatment with chemo, radiation, or targeted therapy based on genetic mutation.

Two weeks later I had surgery, a VATS (video-assisted thoracic surgery) and removal of my right lower lobe where the tumor was located. I was in the hospital for six days and had a rather 'normal' recovery time of 6 weeks before I was mostly rehabilitated. The recovery process included lots of walking, starting slowly with short walks and increasing steadily both length and time for rehabilitation. My tumor was re-staged, and because it was less than 3 cm in size, it was staged as 1a. I was so lucky and to this day (3 years later), feel so blessed!!! The drug I had been on, serendipitously acted as early detection of my lung cancer, creating all the symptoms of a late stage cancer, ultimately sending me to my doctors.

Obviously, early detection is one of the best things we can do to help address the disease of lung cancer. While there is much research going on, including breath and blood testing so that we do not have to rely on expensive CT scans for diagnosis, we need more funding to keep supporting those scientists and doctors who are dedicated to eradicating this disease.

I know I am very fortunate. Since my surgery, I have hiked an unrestored 7 kilometers of the Great Wall of China; I continue to hike the beautiful Rocky Mountains with my girlfriends, ski with my family, and ride bikes with my husband. In one week (February 21, 2016), I will participate for the first time in an American Lung Association Fight for Air Climb in Denver. I am presently serving on the Patient Advocacy committee of the International Association for the Study of Lung Cancer based in Denver and I hope to help raise awareness about lung cancer, money for research on lung cancer, and support through advocacy those diagnosed with this insidious disease. I feel lucky and blessed that I am alive to do so. There is hope!