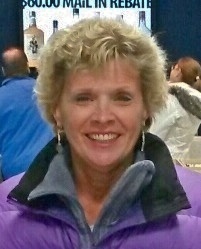 She was diagnosed with Stage IV lung cancer in January 2013 at the age of 57, right after her birthday. Lymph nodes removed in February 2013. Went to CTCA for second opinion after doctor told her she had six months to live. But then, in order to go to Sloan Kettering, she had to wait one month because it was so packed. Didn't feel she could wait one month if she only had six months to live, so upon the recommendation of her friend, she contacted CTCA. She got an appointment immediately and started treatment with Dr. Kazmi.

She noticed she was losing a little bit of weight, but thought it was just lifestyle/diet. She thought she might be working out too much, not eating enough, or just really stressed from having to live out of a suitcase since her family lost their home to Hurricane Sandy. At that time, she and her daughter were living in an apartment and her husband, son and dog were living in a trailer on the property.

She had a swollen lymph node, went to her primary care physician and had a sonogram. It came back as just a swollen lymph node. The doctor wouldn't accept that and sent her to an ENT doctor. The ENT doc gave her antibiotics and told her to come back in two weeks if the swelling didn't go back down. It didn't, so the doc then did a biopsy. He called her while she was at work, telling her she had lung cancer. State of shock! She was in great shape, was an athlete growing up, a runner, she was still very healthy, very active, and she never smoked. Her dad was a smoker, had lymph node cancer for 30 years, and lived to be 90 years old. She was told she had six months to live unless she had the genetic mutation. She apparently has this genetic mutation that only about 10% of population has, and that occurs mostly in Asian women (she is not Asian). She had 6 weeks of chemo and, even during chemo, didn't feel too terrible. It felt like she had the flu for a couple days and then got better. Hasn't had chemo in two years. Bones are kind of brittle, but scans show bones now are fine. She has been responding very well to the drug Dr. Kazmi prescribed, Tarceva, to fight the cancer cells.

Taught art for 29 years, thinks she got the cancer from working in a building that had mold in the air. Doesn't know for certain so can't file a lawsuit, but she thinks that might have had something to do with it. She and her husband decided she needed to stop working at the school. They were forced to retire early after 29 years of teaching (she wanted to retire after at least 30 years of teaching).