When Breath Becomes Air: A Review 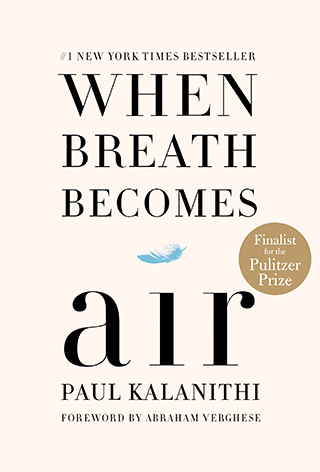 I heard about Paul Kalanithi's book, When Breath Becomes Air, long before I actually read it. I knew that Bill Gates and Anne Patchett both raved about it, that it spent 51 weeks on the bestseller list and was a 2017 Pulitzer Prize Finalist, but I was hesitant to read the memoir about a brain surgeon who was diagnosed with lung cancer because I didn't think I could relate to it. Working at the American Lung Association and having talked to many individuals whose lives are impacted by lung cancer, I decided to finally give the book a shot.

Kalanithi was 36 and nearing the end of residency as a neurosurgeon at Stanford University when he was diagnosed with stage 4 lung cancer. As a young boy, Kalanithi devoured books and had ambitions of becoming a writer, but growing up in a family of physicians, he understood medicine's pivotal role in society. In both his undergraduate and graduate studies, he took on double course loads of literature and science, paving his path to be either a writer or a doctor. Kalanithi was fascinated with the moral complexities that come with humanity and realized that as a writer he would only be a casual observer but as a physician he would be on the front lines of life and death. He decided to go to medical school and pursued neurosurgery, one of medicine's most strenuous fields.

Throughout When Breath Becomes Air, Kalanithi describes the emotional turmoil doctors face as caretakers for the sick, and he grapples with his disappointment in his own humanity and not being able to be perfect in the operating room. The distinct narrative of this novel is that of a doctor who understands that his patients, nearing the end of their lives, have put all of their hope and faith into him to pull them out of their illness.  He brings the readers into the mind of a doctor and shows that for him, and many of his colleagues, this is not just a job, but a calling he was obligated to answer. Early on, Kalanithi made specific decisions to be present for his patients, to meet them where they are and give them the empathy and attention they needed, even if he had already worked 16 hours that day. It's clear that Kalanithi was a gifted neurosurgeon, who would have likely rose to the top of his field worldwide, but he was also gentle and caring physician, the type of doctor you would want to have if you were having brain surgery.
Then Kalanithi became sick and his 20-year plan vanished. He was now the patient.

Kalanithi's oncologist refused to discuss survival rates and life expectancy. Instead, she instructed Kalanithi to live the life he wanted, do whatever he enjoyed the most, but these instructions did not give him clarity. Like any of us striving to live our best lives, he was torn on which direction to steer his goals. If he had 20 years to live, he'd go back to medicine. Only five, then he would write. This question plagued him through the initial treatment that was able to stabilize his tumor and allowed him to return to the operating room. He and his wife even decided to undergo in vitro fertilization treatments to grow their family.

His life was progressing, with a child on the way and nearing residency graduation, when a scan revealed another tumor. Despite what everyone else was saying, Kalanithi knew it was the beginning of the end. He left medicine to spend time with his family and write.

Kalanithi's book was published posthumously, 10 months after he passed away, and ends with a tear-inducing passage written by his wife, Lucy. Now a single mother, Lucy describes visiting her husband's grave with their daughter and teaching her about the father she will never know. It was a fitting conclusion to the book, and I loved it so much that I wanted to hear more from Lucy and her experiences with her husband's cancer.

This novel is not a resource for lung cancer (I recommend Lung.org/lung-cancer for more information) and not a book for only those whose lives have been touched by lung cancer. No matter who you are, or what journey you've gone on, you will find something about When Breath Becomes Air that speaks to you. Whether it is the love of the written English language, grappling with how best to spend your time on Earth or accepting life as the finite thing it is, Kalanithi's words resonate with us all.

When Breath Becomes Air is a beautifully written book that shows us that we can't control the matter or timing of our death, but we can choose how we approach it. It took me awhile to get to this book, and given our finite time on this planet, I highly recommend you don't make the same error.

Disclaimer: The views and opinions expressed in this blog are those of the author's and do not necessarily reflect those of the American Lung Association.