The future of the lung health looks bright with young stars like Hannah Goldenberg, a 17-year-old senior from Greenwich High School, already catching national attention. The up-and-comer, who is heading to join Northwestern University next fall, was recently named a Regeneron Science Talent Search finalist for her impressive research project on the health impact of vaping. American Lung Association volunteer medical spokesperson Panagis Galiatsatos, M.D., MHS, of Johns Hopkins University had the opportunity to have a virtual sit down with this impressive teen to talk about her passions, her project and what she sees for the future of respiratory medicine. 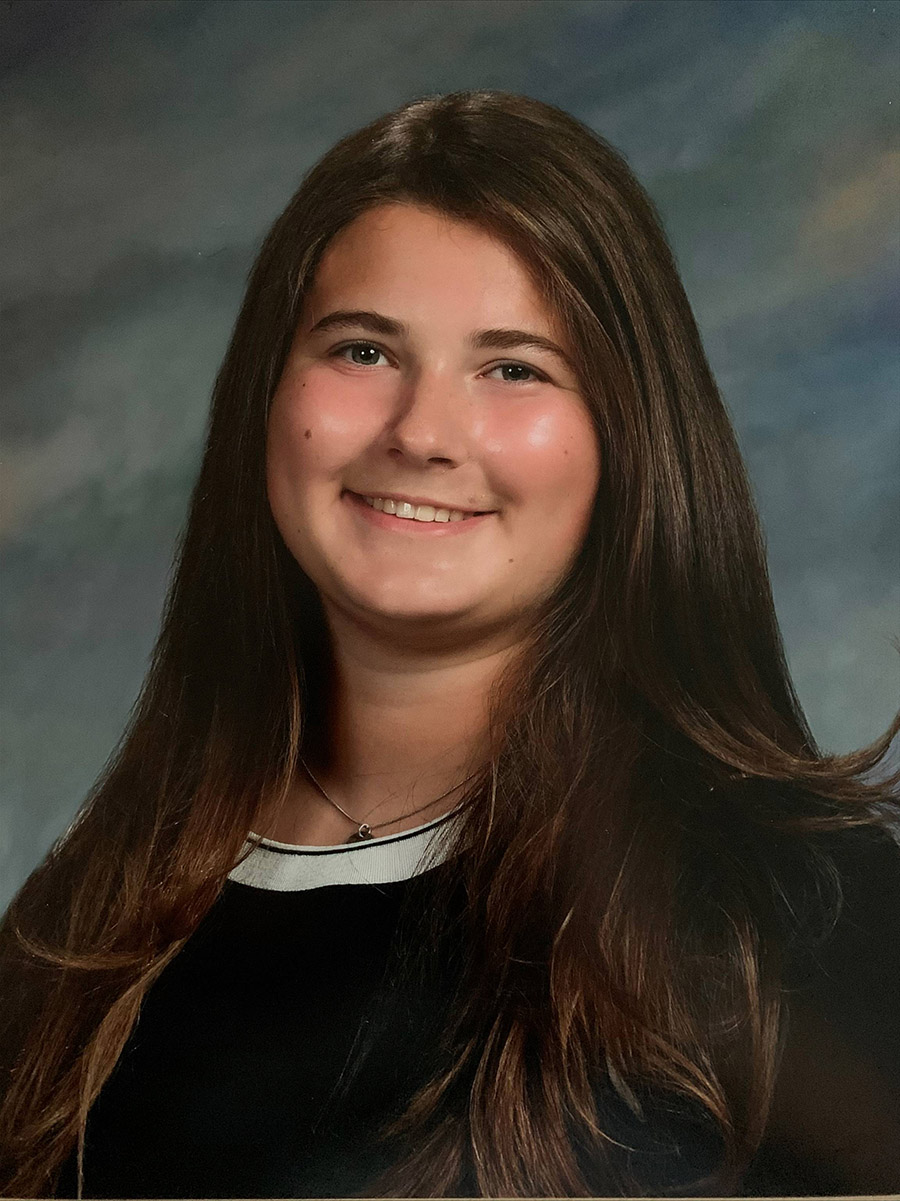 At what age did you develop an interest in science, and what intrigues you so much about it?

I've been interested in science for as long as I can remember. My mom's a physics teacher, my grandpa is a retired engineer, and my aunts and uncles all work in healthcare. So, I’ve always been surrounded by science. I think the part of science that intrigues me the most is how it affects everything in life.

You’ve ironed out why you enjoy science better than most physicians. Why were you interested in pursuing research on vaping and its effect on my favorite organ, the lungs, particularly in relation to COPD? Do you have a particular connection?

On my first day of high school, I walked into the bathroom and saw some of my closest friends vaping. I was really shocked, and also really concerned for them because when we were younger we were always warned about the dangers of smoking tobacco cigarettes and using other drugs. But our teachers, doctors and other adults in our lives hadn't really accounted for e-cigarettes. My peers told me that they thought it was harmless. I had my doubts because there are very few things that you should be inhaling besides clean air. I didn't think e-cigarettes were an exception to that rule.

I also wanted to do some research on COPD because my aunt has an alpha-1 antitrypsin deficiency and is at really high risk for COPD because of it. My cousins have not yet been tested for that deficiency, but they're also at high risk.

Have you been approached to use e-cigarettes? And if you have, how have you handled it?

I’ve been pressured to try e-cigarettes many, many times. At first, I was dealing with the pressure by just being skeptical. I'm typically skeptical of a lot of things when they first come out. I also felt that e-cigarettes were echoing tobacco cigarette beginnings, in that, when everybody started using tobacco cigarettes there were no known health risks at the time. Later, once I had really started conducting my research, I realized how gross e-cigarettes were, which was also a big reason for me to stay away from them.

What did your research show?

I focused on diacetyl because it's the flavoring chemical used in microwave popcorn that can cause bronchiolitis obliterans or popcorn lung. Additionally, using more gas chromatography, I found that in three inhalations of an e-cigarette, the user is exposed to about 18 parts per million of diacetyl. The literature indicated that a hundred parts per million of diacetyl was enough to cause respiratory damage.

I also used infrared spectroscopy during my first year to find that there's no detectable amount of water in e-cigarettes because a lot of my peers thought it was just water vapor in e-cigarettes and therefore it was harmless, which is untrue. Something that ended up being really instrumental to my research, but I discovered completely by accident, is that e-cigarette vapor recondenses back into a liquid almost as soon as it enters the body.

Infrared Spectroscopy is the analysis of infrared light interacting with a molecule. This can be analyzed in three ways by measuring absorption, emission and reflection. 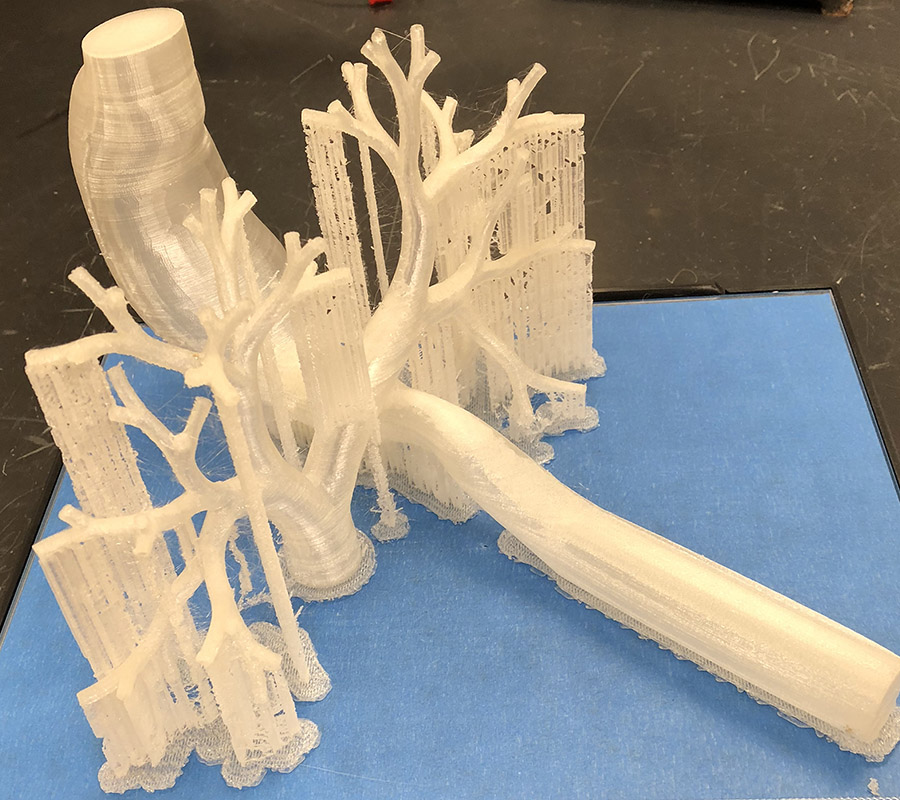 To track where that liquid ended up, I printed a 3-D model of the human oral cavity, trachea, and bronchial tree, and then designed and built a two-chamber respiratory system out of plastic cereal boxes to mimic breathing. After creating the lung model and respiratory system, I added fluorescent dye to the pod liquid so that when I shined UV light on it, I could see where all the liquid had recondensed in the lung. It deposited throughout the oral cavity tracheobronchial tree and was highly concentrated in the bronchial tree where there's human bronchial epithelial cells or HBEs.

That discovery sparked the second stage of my research where I looked at the effects of e-cigarette usage on HBE cells. I ran a lactate dehydrogenase cytotoxicity assay   to determine that the concentrations of e-cigarettes, diacetyl and nicotine that I was using weren't going to kill the cells. I found that the e-cigarettes caused a 32% increase in LDH secretion, and diacetyl cause a 26% increase. Those increases indicated to me that e-cigarette usage and diacetyl can cause cell and tissue damage. After determining that the cells were viable, I looked at genetic expression and found increases in those genes similar to those of patients who had been smoking and eventually developed COPD.

Lactate dehydrogenase (LDH) is a cytosolic enzyme present in many different cell types that is released into the cell upon damage to the plasma membrane. A LDH Cytotoxicity Assay provides a simple and reliable method for measuring this damage.

For the final year of my project, I bought and grew Drosophila melanogaster, which are wild-type fruit flies. I chose 18 flies and separated them into six groups. There were control groups, and then flies exposed to both e-cigarette vapor and cigarette smoke. I separated the male flies from the female flies and had three in each group. My results from the HPE cells and fruit flies provide pretty compelling evidence for a possible link between vaping and COPD development.

What advice do you have for other future scientists?

Never give up because a big part of science is failing and making mistakes. Some of the greatest discoveries came about because of accidents or through mistakes. I believe everyone can discover something new because there's always new science to be discovered, no matter how big or small it is. And making a discovery is an amazing feeling.