It was among the worst of times: 500 million people infected and an estimated 50 million victims worldwide with approximately 675,000 of those deaths in the U.S. These stark numbers had a significant impact on relatively recent history.

The 1918 influenza global pandemic – commonly referred to as the “Spanish flu” – did not originate in Spain. The source remains a mystery to this day, but the first known case globally occurred at a Kansas military base in early March 1918.  The moniker is due to confusion resulting from wartime media blackouts that prohibited news of the infection until it first made headlines several months later in Madrid, Spain. By then, the virus had aggressively spread throughout the world because of international troop movements. 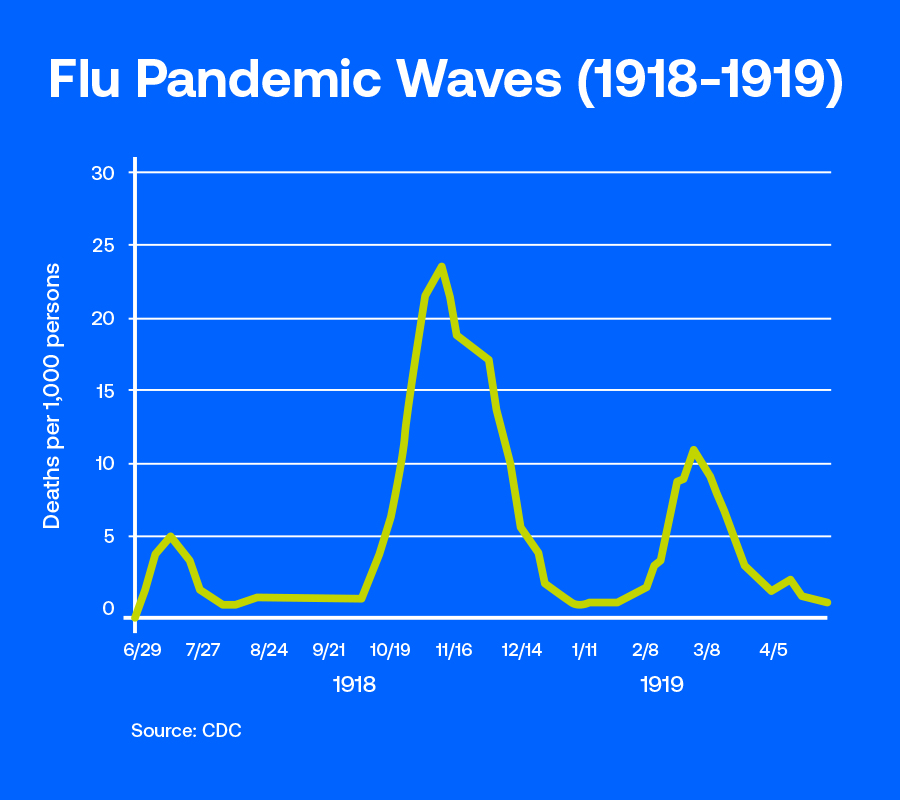 The Spanish flu disproportionally targeted the healthiest members of society. The infections spread over three waves, the first of which took place during the spring of 1918 and was the mildest. The following fall, the second wave hit hard just as Americans were expressing frustration over the social distancing rules that had been put into place. Many of them protested the public health measures, such as mandatory masks, stay-at-home orders and business closures. This second wave was the most severe and killed nearly 200,000 Americans in October 1918 alone. The third and final wave began in early 1919 and ran through spring, resulting in even more illness and death. This flu ultimately caused more deaths worldwide than the total number of soldiers and civilians, combined, killed during World War I.

Now, over a century later, the Spanish flu and its three waves of activity provide useful context while the world is paralyzed once again by the current coronavirus disease (COVID-19) crisis with more than 4 million known cases worldwide and 1.4 million in the U.S. as of the publication date.

These days, information circulates much more rapidly and through many more channels, including television, social media and videos. Mass communication can be a double-edged sword leading to an influx of misinformation; however, a distinct advantage of this increase in dissemination speed is the world can become aware of potential pandemic threats very quickly. In turn, it offers the chance to better prepare for the spread and hopefully lessen the impact when these threats arrive. Additionally, the timely availability of information is only as good as the response it elicits. In large part because of the faster and more widespread flow of information today compared to a century ago, the current response has been significantly quicker and better informed than that of 1918.

As states begin to reopen and loosen their shelter-in-place restrictions, similar painstaking lessons from the Spanish flu should be used to help temper future waves of infections and deaths. History has provided a playbook, an opportunity to learn from the past. Based on what has been carefully documented by historians and scientists, a second wave of COVID-19 may potentially infect and kill more than the first. To heed the Spanish flu’s cautionary tale would be helpful; to ignore it could be devastating. These pandemics, after all, are two sides of the same story.