TB in the Community: Forgotten but Not Gone

A hundred years ago, tuberculosis (TB) was the leading cause of death in the United States. These days, thanks to the development of effective treatments and a vigilant public health system, this deadly disease is largely controlled in the U.S. But TB is not gone—and it should not be forgotten.

To understand more about how TB affects the communities we live in, we asked nurse Maureen Murphy-Weiss, a public health manager with the Ben Franklin TB Program at Columbus Public Health in Columbus, Ohio, to answer some common questions about TB. 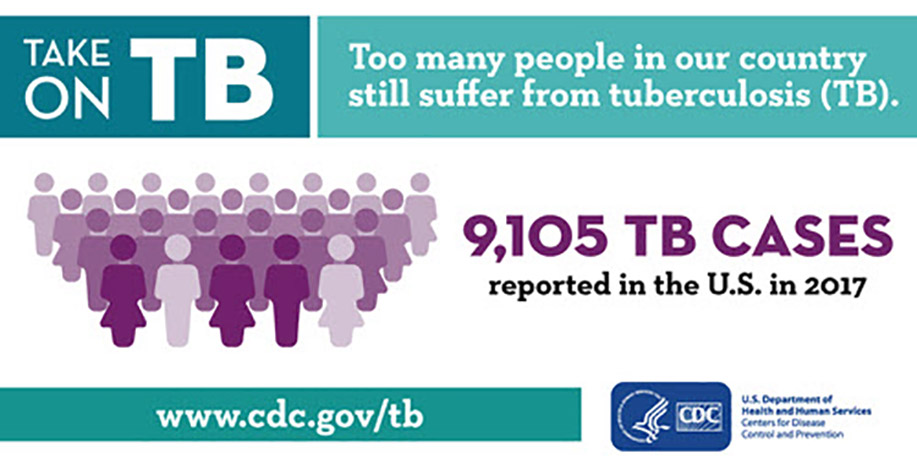 Q: Is TB still really a problem where I live? I haven't heard anything about it.

A: No community is immune from TB. According to the Centers for Disease Control and Prevention (CDC), tuberculosis was reported in all 50 states in 2017. But cases of the disease are not evenly distributed nationwide. Almost half of the 9,105 cases were concentrated in four large states: California, Texas, New York and Florida.

Q: How does TB spread?

A: TB germs are released into the air when a contagious person coughs, laughs or even talks. If another person breathes in those germs, there is a chance they will become infected. But it's not easy to become infected with TB. Usually, a person must be in close contact with someone who is sick with TB disease for a long period of time before becoming infected themselves.

Most people who become infected with the TB germ never become sick with TB disease. The infection lies dormant, and is kept under control by their immune system, so they are not contagious. This is called latent TB. If a person with latent TB gets sick with an illness that weakens their immune system, the latent infection can become active TB disease. People with TB disease have symptoms, become contagious and can spread the disease to others until they are treated with a special combination of antibiotics.

Q: Who is most likely to get TB? Could it happen to me?

A: TB does not live on surfaces and it cannot be spread by touching, eating or drinking after a person with TB. While anyone can get tuberculosis, household members and close friends who spend a lot of time with the sick person are more likely to become infected. TB is most common in urban areas, places where there is higher population density, and where there are many people who travel to parts of the world where TB is still common. Outside the home, TB spreads most easily in crowded conditions such as jails, shelters, nursing homes and school dorms. Once infected, people with conditions that weaken their immune system, such as diabetes or HIV and people who use excessive amounts of alcohol, are at higher risk for becoming sick with TB disease.

Q: What happens when a case of TB is diagnosed in a community? What is the role of a TB case manager?

A: A person with symptoms and risk for TB is usually referred to the public health department where the diagnosis is confirmed or ruled out. Public health agencies often provide medical and nursing services, and in most states, are required to monitor treatment until the patient is cured. To keep the disease from spreading, the patient is kept in isolation, usually at home, until they are no longer contagious. This can be for several weeks, and in some situations, many months. Throughout treatment, staff at the health department work to identify and test people who may have been in close contact with the sick person. Most often, that includes family, friends and co-workers. Anyone found to have latent TB or active TB is provided treatment.

The primary job of the public health TB case manager is to coordinate social services and medical treatment until the patient is cured. That sounds simple, but it can be a real challenge. The patient already feels terrible from the illness, and medications used to treat TB can have side effects that make it even more difficult. Being confined in isolation may mean the patient can't work, which takes a financial and emotional toll on the whole family. The TB case manager coordinates with social workers and other agencies to connect the patient to services they need to get through a very difficult time.

Q: What is most important for people to know about TB in the community?

A: Tuberculosis prevention and control is a real success story for the public health system in this country over the last hundred years. But TB is still very much with us. It takes the whole community working together to keep TB under control. People need to remember that anyone can get TB, and there is no shame or blame in seeking care if you are concerned about your health or that of someone you care about. Healthcare providers should be trained to "think TB" so they are able to recognize symptoms and identify active cases sooner. And we need to support continued investment in public health programs, and in the development of new medical treatments with a shorter duration and fewer side effects.

Q: What is the best part of your job with the TB program in Columbus?

A: It's been an honor for me to do this important work. By helping people stay in their housing, preventing transmission of the disease to their loved ones, and connecting them to other resources, I feel like I am really making an impact on people's lives, and on the health of the community I serve. The American Lung Association has been incredibly supportive of the work that we are doing. I think it is a great testament to your organization's long history of fighting this disease.

For more information about TB, visit Lung.org/tuberculosis or call the Lung HelpLine at 1-800-LUNGUSA to talk to a trained respiratory professional who can help answer your questions and connect you with support.