'State of the Air': Most Polluted Cities, Then and Now

For 19 years, the American Lung Association's "State of the Air" report has tracked air quality across America, chronicling our nation's progress in making our air cleaner and healthier. Over the years, the report has celebrated the reduction of harmful air pollution due to the Clean Air Act. Ozone (smog) is one of the two widespread air pollutants measured each year in "State of the Air."

Let's look at the 10 most ozone-polluted cities from the very first "State of the Air" in 2000 and see where they are now.

But first, a quick primer on how the report comes up with its city rankings each year. To compile the "State of the Air" report, the American Lung Association relies on publicly available, quality-assured data from air quality monitors operated by the states, counties, federal agencies and tribes across the nation. The Lung Association ranks cities based on the most polluted county within that metropolitan area, which may include a single county or multiple counties with a high population and close economic ties throughout the area. The official name of the metropolitan area and the counties it includes may change over time, as you'll see in the lists below. The full methodology is available here. Now let's compare the ozone rankings.

The first thing we notice is that many cities appear in both lists, such as Los Angeles and Bakersfield. This doesn’t mean their ozone pollution levels haven't improved, but does mean they still have work to do. The fact that so many cities in California are listed has to do with how ozone is created. Ozone develops in the atmosphere from gases that come out of tailpipes, smokestacks and many other sources. When these gases come in contact with sunlight, they "cook" and form ozone smog. With such high amounts of tailpipe emissions from highways, ports and railways, combined with warm, sunny days, many areas in California provide the perfect kitchen to cook up ozone. The same factors have made the growing Phoenix, area a more recent entry in the top 10. Conversely, the reduction of emissions from powerplants—thanks to the Clean Air Act—have helped areas like Atlanta and Charlotte move down the list, and off the top 10. 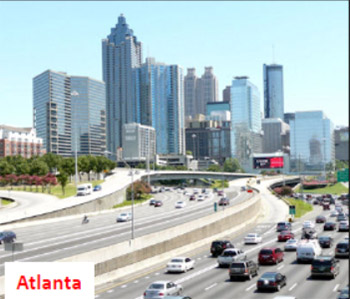 Since the first "State of the Air" 19 years ago, we have seen that the tools implemented under the Clean Air Act have successfully reduce ozone levels across most the country. In fact, 11 cities with historically high ozone experienced their lowest number of unhealthy ozone days on average since the report began in 2000. Yet ozone remains one of the least well-controlled air pollutants in the country and poses real dangers to our health. Ozone triggers asthma attacks, sends people to the hospital and can even cause premature death.

Unfortunately, the progress we've made in reducing ozone is threatened/in jeopardy. Policy changes from Congress and the U.S. Environmental Protection Agency would allow emissions that form ozone to increase. And as we saw in the data from the 2018 report, increased temperatures from climate change will make it harder to continue reducing ozone, and in some areas, levels will rise. That's why we must take steps to protect the Clean Air Act and fight climate change to protect our lungs!

Ready to help? Here are some things you can do:

Together we can make a difference, and the state of our air will continue to get better and better.

Join over 500,000 people who receive the latest news about lung health and clean air, research updates, and inspiring stories.