Getting Up Close and Personal with Radon

I have been on staff with the American Lung Association's marketing and communication staff, I have read, written, researched and posted information about radon poisoning, an indoor air pollutant that is the second leading cause of lung cancer.

Because my county in Wisconsin is known to be very high in radon, I had tested my 100-year-old home several years ago and was happy to note that my levels were below the recommended limit.

Fast forward to October 2015, and after listing our home for sale, we received an offer, contingent upon a radon test and a mitigation system, if the level tested too high. I thought nothing of it since I had tested my home three years prior. The radon tester informed me that radon levels change and should be tested every other year. And his radon tester was an electronic version that would gather data over 48 hours and produce a written print out. 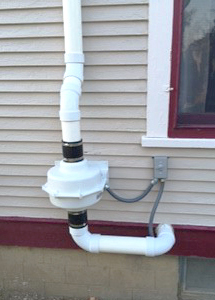 So 48 hours later, my home tested at 4.8 picocuries per liter of air (pCi/L), slightly above the “fix your home” level of 4.0 pCi/L that the U.S. Environmental Protection Agency (EPA) recommends and well above the level of 2 pCi/L that EPA urges you to consider fixing. The pCi/L is a measure of concentration of radon in the air. Fun fact: It was named, in part, after Marie Curie, who conducted pioneering research on radioactivity and was the first woman to win a Nobel Prize.

We took the next step of calling a certified radon mitigation service to install a system. These folks were very informative (and very busy – they install hundreds of systems a year). They explained that it’s generally easier to install a system in a newer home, as they’ll put it right over the sump pump. With an older home (that has no sump pump), they would have to drill a hole in the floor in which to draw the radon up. The PVC pipe would then run from the basement, out through a wall and up the side of the house, past the roofline.

They went to work and installed a system, with a fan that will always run, in about a day. THEN...another test and we came up at 0.6! I was relieved for us and happy for the new buyers!

Before actually going through it, I imagined the process to be much more complicated (and expensive) than it actually was. We paid about $1,200 for the system (including the test) and I think that’s a reasonable price to pay for the peace of mind that comes from helping to reduce the risk of lung cancer. Now, when I work on communications about radon, I have new insight that comes from going through the experience. My only regret is that we didn’t install a system sooner, and yes, you guessed it, in our new home, we’re requiring a radon mitigation system be installed right away, too!

Airthings will donate $1 from each Airthings Wave, Wave Plus, Wave Mini and Corentium Home radon and indoor air quality monitors sold on Amazon.com through January 31, 2020 and Airthings.com through October 31, 2020, with a minimum donation of $25,000 to the American Lung Association’s LUNG FORCE initiative to support lung cancer research.