"This Is an Exciting Time to Be a Lung Cancer Researcher" 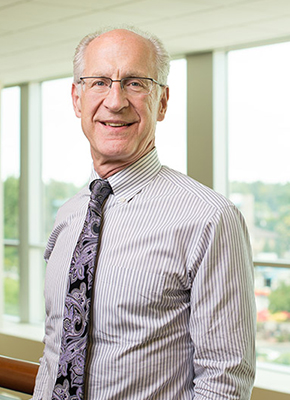 "This is an exciting time to be a lung cancer researcher," says Dr. Kern, who is also Chief of the Division of Oncology at National Jewish. "There has been an incredible change in therapy over recent years. We have a much greater understanding of the genetic changes that drive lung cancer, which has allowed us to develop molecularly targeted treatments. We also have a much better understanding of the processes that cancer uses to escape immune surveillance, and now we are harnessing that to treat lung cancer. This has all happened in the past 15 years. It’s led to an amazing change in the way we understand and treat lung cancer."

Dr. Kern studies how cells in the lung grow, focusing on a family of proteins that regulate cell growth by transmitting signals outside the cell to the inside. These proteins, called tyrosine kinases, play an important role in keeping a cell’s growth in check. When tyrosine kinases malfunction, it results in abnormal growth that can lead to lung cancer. Dr. Kern is looking for molecules that interfere with malfunctioning kinases that might be used to treat the disease.

He received his first grant from the Lung Association in 1985, when he had just finished a fellowship in pulmonary and critical care medicine at the University of Pennsylvania. His mentor, Peter Nowell, M.D., encouraged Dr. Kern to study the origins of lung cancer. "At that time, lung cancer wasn’t something that many pulmonologists were interested in," Dr. Kern remembers.

His second Lung Association grant, a Biomedical Research Grant, in 1989, allowed him to delve deeper into his HER2 research. In 1992, Dr. Kern received a Career Investigator Award from the Lung Association, which furthered his research into the mechanisms of HER2 signaling and cell transformation, and the potential of targeting the oncogene to treat lung cancer.

Rewards of Being a Mentor

Dr. Kern encouraged two research fellows working in his lab to apply for Lung Association grants, and they were successful in getting these very competitive grants. "That support allowed me to expand the scope of our work, provide mentorship to others with an interest in lung disease and help establish them as physician scientists," he says. "Watching their careers develop and making sure they had the right guidance has been very satisfying."

The Lung Association grants provided a foundation for Dr. Kern to receive a merit review through the Veterans Administration (VA), which allowed him to continue HER2 research. With the work supported by the Lung Association Career Investigator Award, Dr. Kern was also able to secure two larger grants from the National Institutes of Health (NIH). Four of the research fellows in his lab also received career development awards from the VA or NIH.

Based on his studies of HER2 in lung cancer, he conducted a national clinical trial on the effectiveness of a drug called Herceptin, which blocks HER2, in people with advanced lung cancer who had not received other chemotherapy. Though Herceptin was not found to be an effective lung cancer therapy, Dr. Kern said, "I am proud of fact we made an initial discovery in lung cancer and translated it into a clinical trial, covering the spectrum of initial concept to its application."

In his current research, Dr. Kern is taking a broader view, looking at all 600 tyrosine kinases and turning them off in human cells one by one. He is matching drugs that target kinases and are already approved for therapy of other diseases, and testing their potential in targeting tyrosine kinases in lung cancer. One drug developed to treat leukemia is now in animal testing for lung cancer. "If we find a drug that shows promise in treating lung cancer and is already approved for human use, we can quickly move to clinical trials," he notes.

"Grants like those from the Lung Association are especially important for physician scientists early in their career, when they are pulled in many directions", Dr. Kern observes. "These are the people who understand disease and the need to develop new technologies and drugs," he says. "Their clinical responsibilities bring them immediate results, but scientific research has a much longer timeframe. Supporting them early in their career allows them to lay a foundation for success. This is critical in maintaining the scientific pipeline."

His own experience as a physician scientist has made him both a better clinician and a better researcher, Dr. Kern says. "Knowing how to diagnose and treat the disease, seeing the personal impact of lung cancer on patients and how they respond to therapy, makes me understand the devastating effects of the disease at a very personal level, informs my understanding of the pathways that are driving lung cancer and how they can be targeted," he says.

See researchers across the country who are making an impact on lung health.