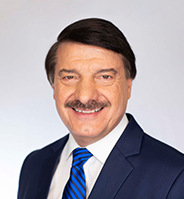 As a result of his involvement with the Lung Association, Dr. Rizzo has had the opportunity to educate both patients and the public as well as fellow professionals about the importance of preventive care and healthy lifestyles (particularly the role of cigarette smoking cessation) with regard to preserving lung function over the years.

In his volunteer leadership roles with the Lung Association, he has testified before Congress on behalf of advancing lung disease research through funding of the National Institutes of Health and has lectured at American Lung Association meetings throughout the country. In addition to smoking cessation, tobacco control, and air quality, his topics of expertise include specific disease states such as COPD, asthma, sleep Apnea and lung cancer. The importance of recognizing and trying to eliminate some of the healthcare disparities that often involve these diseases is one of his concerns.

A recognized pulmonary health expert, Dr. Rizzo has been published in the New England Journal of Medicine, the journals Respiratory Care and CHEST, and  others.