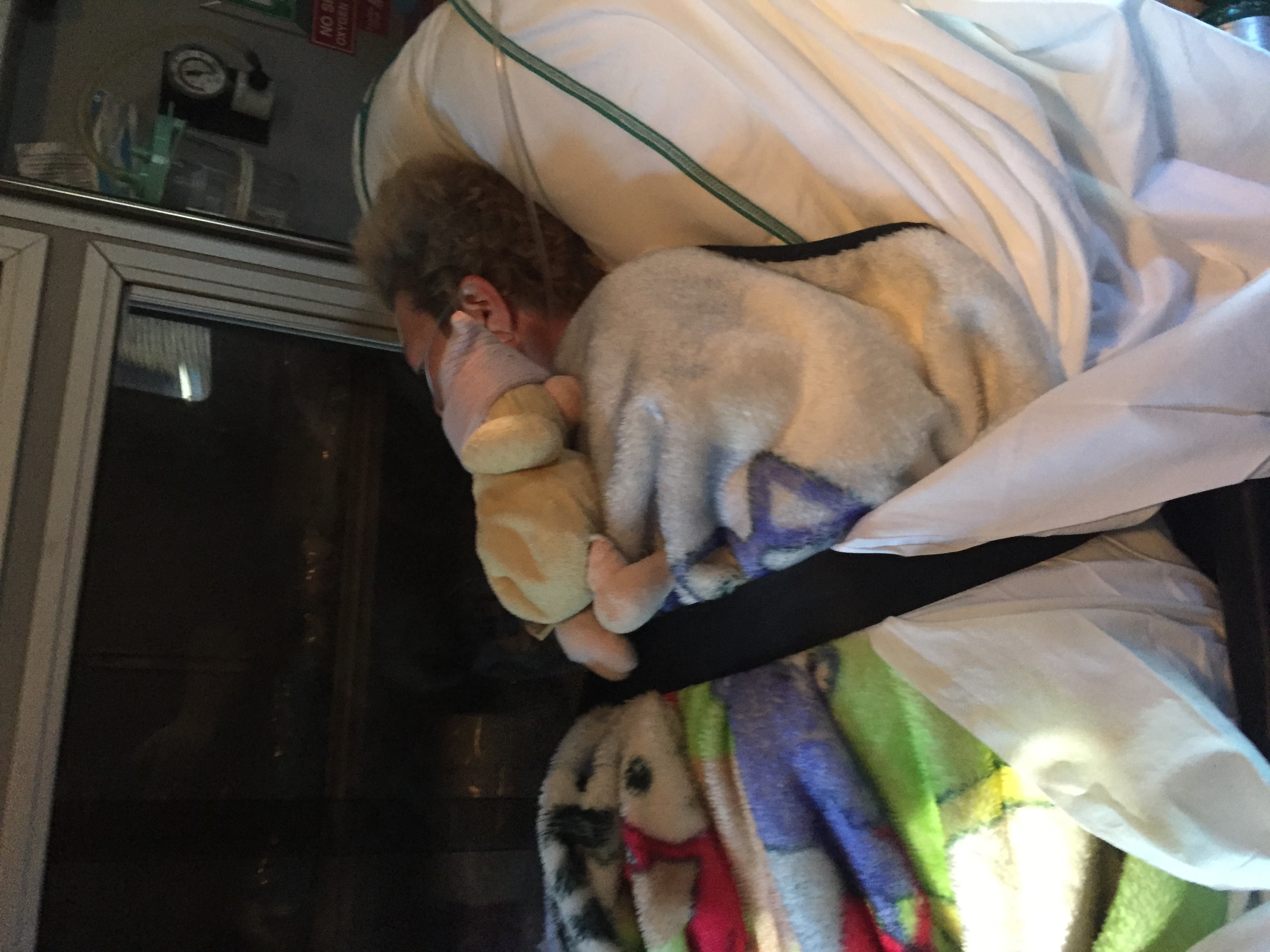 My Mommom was diagnosed with stage 1 non small cell lung cancer in 2013 in her top lobe of her right lung after being admitted into crozer hospital for pneumonia. The pneumonia would not go away so they scanned her chest to see what was going on. When the results came in they saw that there was a fungus growing in her lung and it turned out to be cancer. So she had surgery to get the top lobe of her right lung removed and it was successful. She was cancer free. Or so we thought.

Six months later she went back to her oncologist and found out that the cancer had spread to the second lobe of her right lung. So we tried chemo and that didn't really help, just put her in pain. So another six months went by and she had another surgery to get the middle lobe of her right lung removed. The surgery again was a success. After this surgery she went to PT to walk and breathe normally again and help her walk. She went through chemo again and even did some radiation. Another year later when she checked up with her oncologist the cancer had spread to her last lobe of her lung which had now grown back to the cavity of the original lungs size (the last lobe grew to that size not the cancer). She didn't want another surgery since she was in her second year of battling the cancer. So she went to taking pills of chemo, which helped with the cancer.

Fast forward to Christmas of 2015 she broke her hip falling down stairs right outside of her son's front door. She went to x-ray the hip and it was in fact broken but what they saw in her hip was cancer. That's why it broke so easily. So the pills weren't working. So she went back to regular chemo and it made her feel like shit. So now, she gets diagnosed with another disease, Amyloidosis which is an over production of the amyloid protein and it has to deposit somewhere so it deposits in her organs. So we're thinking of doing a stem cell transplant for that but then we found out the cancer had spread more. So the amyloidosis was on the back burner.

She started this new drug in 2017 and it actually worked. It made her feel good, she looked good. Only to find out it wasn't helping the cancer at all. It just made her feel better. So we then found out her now stage 4 lung cancer had spread from her lung to her stomach, liver, hip, legs, spinal chord and her brain. On October 26, mommom was admitted to crozer hospital in Chester, PA. I went up to visit her and she looked like she was OK but then when she started talking to me it was incoherent. She was having word salad. I just thought it was because of the drugs they put her on. The next day they moved her into ICU. Her nurse at the time told us that she had had a stroke last night. I was furious. How dare she tell us. She was so out of line. She said it so nonchalantly and I was pissed. Why wasn't anyone told that this had happened?! Why did a nurse tell me and not her doctor!!! The doctor then came in and explained that due to cancer it makes the blood clot easier. She also had A-fib. So what they were thinking was that she had an A-fib episode and a blood clot had formed in her heart and then when the episode ended the blood clot got pushed from her heart into her brain, causing the stroke.

I came back up the following day to stay overnight at the hospital with her. She didn't really know who I was but she appreciated the company. So I held her hand and stood by her bed. She didn't want me to let go so it let me know that she knew who I was. The next morning the doctor came in and told us that she needs to be moved into hospice care because he doesn't see her living past a few days. She got moved to Taylor hospice care which was a part of Crozer. I rode in the ambulance with her to the hospital and I cried the entire time in the ambulance. When we arrived at the hospital her nurse said she was close and then all the family came and visited her. My Grandpop, my uncle, my mom and my girlfriend were the only ones that stayed with her late into the night. The hospital had a little gift shop and I bought a pair of fuzzy socks and put them on Mommom's feet because they were always cold. I left the hospital around 9:30 p.m. with my girlfriend. My mom and Grandpop came home around 2:30 and told me that mommom had passed peacefully and pain free.

On October 31, 2017 my grandmom has passed away. She was my everything. She was my best friend. We would do everything together. We traveled everywhere. She loved me more than anyone. We were extremely close. I'm crying now as I type this because she meant absolutely everything to me.