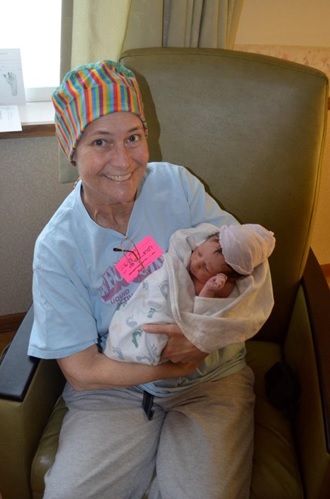 When you hear the word cancer it tends to make time stand still; for my family time stopped in 2013.

The inspiration and driving force behind the team Kris' Krew is the memory and fight that my aunt, Christine B., lead against Lung Cancer. Aunt Chris was a smoker, had been a smoker for most of her life and had no intention of quitting. In her late 40s Aunt Chris was a healthy woman other than the fact that she smoked. Cutting the grass one day she started having chest pains, thinking she was having a heart attack Aunt Chris went to the hospital. What she had thought was a heart attack was actually a large mass that was causing her to have shortness of breath. After further test Aunt Chris was diagnosed with Stage IV lung cancer. No one thinks it's going to happen to them or affect people they know and suddenly there we were wondering what was going to happen next.

Unfortunately, there weren't many options available to Aunt Chris at the stage the cancer was found, even with treatment she was given around a year. Aunt Chris chose to fight and give herself as much time with her family as possible. The first couple of months it didn't seem like anything was different, while she did undergo treatments that would maybe help prolong her life the side effects weren't apparent yet. As the treatments continued you could slowly see the changes: fatigue, hair loss, unable to keep food down, as well as other medical side effects of the treatments. Aunt Chris was able to hide a lot of her discomfort and embraced her hair loss with a charisma and strength that should be admired by all. Even as time elapsed and her body changed, at some points working against her, Aunt Chris took everything in stride and did what she could to help in her fight against lung cancer. I will always admire the bravery she portrayed throughout her battle, as well as her insistence on quitting smoking after years of the habit. When I asked her about it, her response was "If all these people are working so hard to help me win this fight, I think the least I can do is quit smoking so I stop working against them." Sadly Christine B. lost her valiant fight against lung cancer August 27, 2014. In her honor, family and friends participate in the Lung Force Walk raising funds and awareness towards one day finding a cure for this disease.

Our family has always been close, but banding together in efforts to help Aunt Chris has brought our family bond to another level. Participating in the Lung Force Walk has been a way for us to remember and recognize Christine B. for the amazing person she was. They say time heals all wounds, I look forward to the point in time where I can talk about the astounding woman my Aunt Chris was without crying. For now I know my voice is heard through my family's efforts in addition to my own working alongside the American Lung Association in its fight against Lung disease.

I highly recommend people to get involved with the American Lung Association. If not participating in the walk itself helping to volunteer, raise funds, or simply spreading the word. Being a part of something so monumental and knowing even your small part is making a difference, helps give a sense of purpose to everyone.

If raising funds intimidates you, fear not for there are easy ways to start fundraising efforts. You can always start small and improve upon the way you fund raise as the years pass. A few fundraising ideas that our team has incorporated are: raffles/silent auctions; sports pools/calendar raffles; host a bake sale/have luncheons at work; sell team products with proceeds going towards the American Lung Association (shirts, hats/head bands).

I'm ending our story with this quote I found on the internet and encourage everyone to remember whether their battle is lost or won:

"Good bye is not forever,

Good bye is not the end,

It simply means I'll miss you,

Until we meet again"