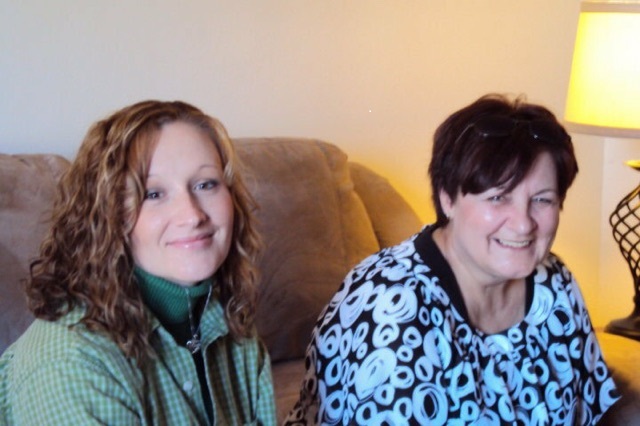 My mother Nancy was diagnosed with stage 3 lung cancer in June of 2004. She had been a long time smoker, beginning in her late teens which continued off and on throughout her life until she was diagnosed at age 55. Her own mother, Iris, passed away from lung cancer when she was a teenager. I remember being at the hospital the day my mom found out. She was coming out of anesthesia when the doctor called me, my 2 older sisters and my stepfather into her room for reinforcements. The look of fear and heartache on her face is something I will always remember. The doctor told us the only way her life could be saved is if she had her entire right lung removed, and even then he only gave her a 1% chance of survival.

That next week, my mom underwent surgery to have her right lung removed and when she came out of surgery we all breathed a sigh of relief as if there was nothing more we needed to worry about. Yes, luckily the lung cancer was contained to only one lung, but we didn't quite understand that just because they were able to remove all the cancer didn't mean that her life would now be easy or back to normal.

The coming weeks, months and years were hell on my mother. She had one lung, which meant she had only half the oxygen capacity she used to have, not to mention a higher risk of infection, pneumonia and other lung related diseases. She was also a smoker for over 30 years which made her one functioning lung unhealthy as well. She spent countless nights up doing breathing treatments and breathing exercises in an effort to expand her lung capacity in her remaining lung.

Tasks that used to come easy, such as getting dressed, walking across the room, grocery shopping and some days even talking became increasingly more difficult even though doctors told her it should be getting easier.

The weather also played a huge part in her breathing difficulties. If it was too hot she struggled, if it was too cold she struggled, if it was extremely humid she wouldn't be able to leave her apartment for days. My mom came to understand that she could tell what kind of day she was going to have just by watching the weather forecast the night before.

In 2011 she was diagnosed with COPD and emphysema and was told that she would have to remain on oxygen for the rest of her life. She was 62 years old. Still she remained strong and spent her days coloring with her grandchildren and playing hide-and-seek with them in her little two bedroom apartment; which the kids loved because when it was grandma's turn to hide she was easy to find because all they had to do was follow her oxygen cord.

My mother loved life and her family, but she struggled continuously after her lung cancer diagnoses, hoping and praying things would get better. When that was no longer a reality, she became discouraged, depressed and for the first time throughout her ordeal found it more and more difficult to remain strong and positive. She stopped going places, her drapes were always closed and she became very withdrawn.

She was growing tired, but continued to fight as hard as she could. She never quite gave herself enough credit for what she had endured. My mom was now a 12 year lung cancer survivor. I would always tell her that was an extraordinary feat in itself let alone with one lung.

Mom beat her 1% odds and during that 12 additional years that were gifted to her on this earth she was able to witness the birth of two additional grandchildren she otherwise would not have known.

I started running about a year and a half ago and the very first organized run I ever did was the Fight for Air Climb at the US Bank Building here in Milwaukee. When I told my mom that my friends and I were making the climb in her honor, it brought tears to her eyes. She seemed to have a new found hope that she'd lost for a long time. On the day of the climb she was glued to the news broadcast in hopes of catching a small glimpse of our team "Nancy's Sassy Steppers."

Once we made it to the top we took some selfies with the view of the city below and sent them to my mom. It was an emotional experience. Not just for my team, but my mom as well. She said it was nice that even in the condition she was in, she still had the ability to inspire others.

We brought Nancy's Sassy Steppers back again this year to make the 2016 climb in my mother's honor, but this time my hope was that she could be waiting at the top for our team to finish. I emailed the American Lung Association and made arrangements for my mom to meet us at the top of the US Bank Building. She was excited, honored, and nervous, but very much looking forward to the event.

Unfortunately, the week before the climb, my mom came down with pneumonia and was unable to attend.

A little over two weeks later, on April 4th, my mom passed away from complications of COPD which originally stemmed from her lung cancer diagnoses she received 12 years go. She was only 67 years old.

My mother was a loving wife for 20 years, she had three sassy daughters and 8 sassy grandchildren.

Her fight may be over, but I plan to continue the fight in her honor and I am hoping that you all will too. We were all given life for a reason and I believe that it is our responsibility to fight for those that need our help the most.