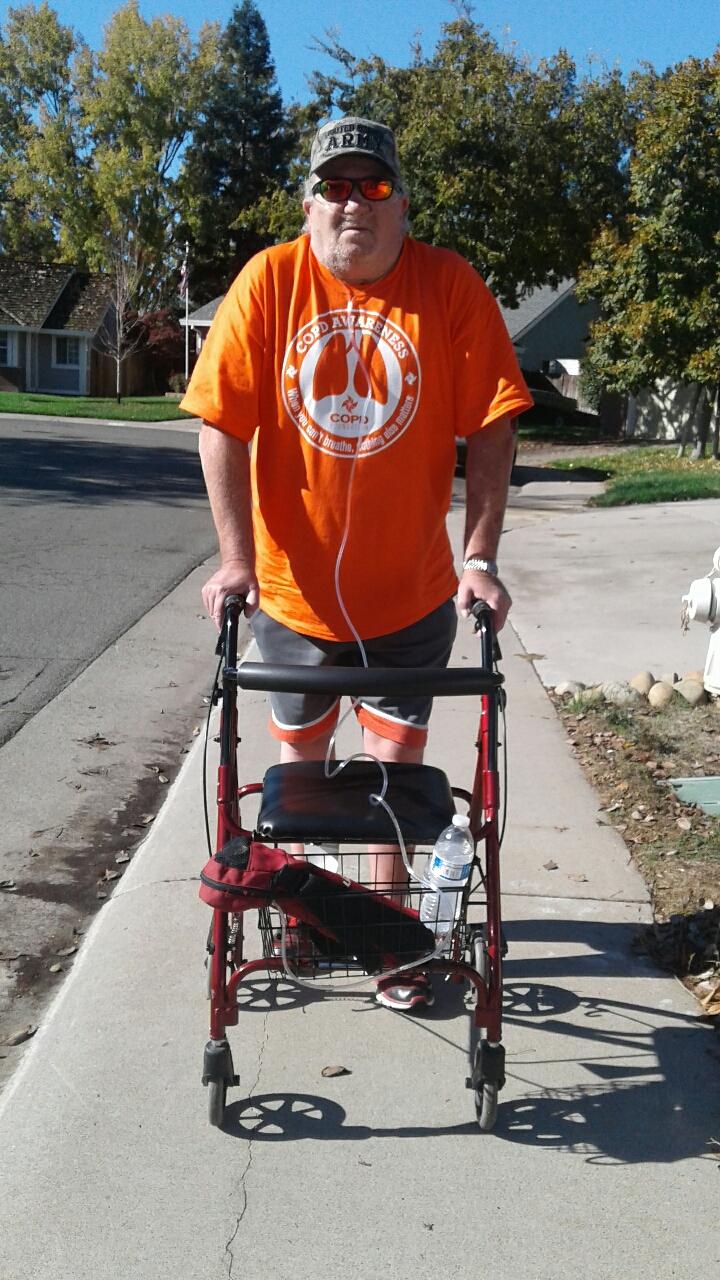 Why I am not scared to live with COPD (Chronic Obstructive Pulmonary Disease): Way back in 2002 I was sent from my work to a company doctor because I was complaining it was hard to breathe. I was sent to an urgent care center where a doctor took a test and told me I had the lungs of a 106-year-old. You would think this would have scared the living hell out of me, but guess what? I kept smoking from that point on without even giving one thought to quitting.

I went back to my job and it was work as usual. I had a really great job, but I had to drive an hour in half every day to get to and from work. So you can imagine how many cigarettes I smoked in my vehicle while on the road. (I was a 2-1/2 pack a day smoker for over 40 years.)

How many minutes does a cigarette take off your life? Research has shown that smoking reduces life expectancy by seven to eight years. On average, each cigarette shortens your life anywhere from seven to eleven minutes. In other words, the time it takes you to smoke a cigarette equals the time that cigarette takes off of your life. So you can do the math and see that I was destroying my life one cigarette at a time. So, somewhere around April 2004 things got worse for me in terms of my breathing and my health in general. My life as I knew it was changing for the worse. It was now getting harder to breathe and harder to drive an hour in a half to work daily. I was beginning to have to rest more, take more breaks at work, and get others to help me do my job. Then flare-ups began happening and some it became more and more frequent and then it landed me in the hospital.

From 2004 through 2006 I got pneumonia every February for those three years. It was to the point where I was scared to see February come around. Did I stop smoking at this point? NO! Like a dummy I kept on smoking. No real reason that I can look you in the face and say "this is why I did not quit," I just enjoyed smoking. In 2004 it clearly became too hard for me to continue working and driving the distance I had to drive weekly. So my boss, bless his heart, called me into his office one day and said, "We need to figure out a way to keep you working and be able to deal with your medical issue." For nine hours we attempted to find ways I could bring my oxygen equipment, nebulizer equipment to work, but the company owner was not comfortable in me doing that for fear that something terribly would happen while I was on the job. So I did the hardest thing I have ever had to do. After my company had put me through school to become a safety/environmental officer, I resigned. All the time, the money they spent on me I felt was wasted. This might not have bothered me if it wasn't for the fact that I was a third generation employee. (my grandpa, my dad, and me). Yes, at this point, scared would be an understatement. Not knowing what lies ahead for me was scaring by itself.

I began having exacerbations more regularly and going to the emergency room became more frequent. Learning what to do and not to do became frustrating for me. The lack of knowledge about my new illness made it even harder to understand. Then one day in 2010 my life changed even more. February 25, 2010 at 3:00 a.m., I smoked my last cigarette ever. At 3:20 a.m. I was on my way to the hospital by way of an ambulance. I was having an anxiety attack, hyperventilating like crazy. Two and a half weeks later I woke up in a strange hospital and could not move a bone in my body nor could I talk. I knew I was on a ventilator, but I did not know I had a trach in me, nor a feeding tube or central pic line. I just knew for some reason I could not move a single bone in my body. I remained like this for three long months at which time I had to learn how to walk all over again. Another month in a rehabilitation hospital where I continue learning to re-walk and learn the things I needed to survive on the outside.

At the end of the four-months I was able to come home, but my world as I once knew it was over and I was still scare of the unknown. "What now?" went through my mind over and over and over. While I was lying in bed at the hospital I made a deal with God. If he would let me live, I would do whatever I needed to do plus one to get better. And I would never stop talking about chronic obstructive pulmonary disease as long as I was alive. So, one day, about a week after coming home I sat down with my family and told them I wanted to move to Sacramento and be treated at UC Davis Medical Center. I knew that this was a teaching hospital so I got in my head that this would be the place to see something new and positive happen about the lungs. So around April of 2011 I up and moved to Elk Grove, California and enrolled in UC Davis Medical Center. The day I move into my home in Elk Grove was the day I got myself right with God and my family and myself. I told myself I either get onboard 100 percent, or I give up and just finish my life and whatever is going to be will be.

So this is why I am not scared to live with COPD. I was blessed in the fact that I got a team of doctors, a team of respiratory therapist who care about me the person and wanted to help me learn my illness so that I could live as comfortably as possible. I was lucky enough to have gone through three Pulmonary Rehabilitation Courses in northern California which help me understand my disease 100 percent. My current doctor stepped up to the plate and made sure I was not scared any longer by becoming my cheerleader, my hero, my teacher, my student, but most of all, my friend. My pulmonary doctor gave me a 24/7 line of communication just so I would never have to be scared again. Back in 2011 that was a game changer for me. I am not scared right now today because my respiratory team and my lung doctor gave me the knowledge, the training, the care and warmth to deal with my disease on a routine daily basis. Because I wake up every day knowing that I know what to do, what to check, who to call should I need to. Because I had to come to terms with the fact that I had a terminal illness. If you just think about it for a minute, we are all going to die at some point in time, however, having a disease like chronic obstructive pulmonary disease gives you a head start if you want to be technical. Some can look at this in a positive manner and others can't. Either way I am comfortable in the fact that we all are going to die someday. So coming to terms with this now makes everything real clear for me, and I don't have to dwelt on "am I going to die sooner than later."

Last, because I am aware of the power of knowledge and I know that there is nothing more at this time anyone can do for me, except me. If I want to continue to live a normal life with COPD then I damn sure better do what I was taught to do and having God on your side helps major big time as well. The one clear thing I have learned with my illness is: "If you don't take control of your life, then God will help you, because you're not going to like the outcome, I promise you. Our breaths are precious and you should never forget that. Don't be scared, get mad that you have taken so long to not be afraid and then get smart and learn more and breathe better.

Join over 500,000 people who receive the latest news about lung health and clean air, research updates, and inspiring stories.