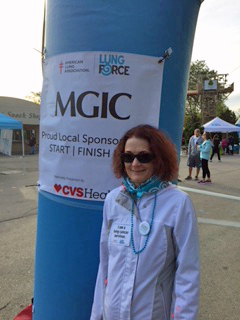 Deb was not a smoker. She was given six weeks to six months to live. Deb had emergency procedures to drain fluid in a lung and lung surgery, and numerous tumors were found. She started aggressive chemotherapy which eventually made her very ill. Deb obtained a second opinion at the Cancer Treatment Center of America in 2008. Here she was not given an expiration date. After changing treatments, she was stable by August 2009.

Today she returns to CTCA once a year for monitoring tests and scans. Deb participates in lung cancer events to raise awareness and give hope to anyone fighting lung cancer. "I am a survivor and thriving. I exercise every day and thoroughly enjoy life. Every day is precious."