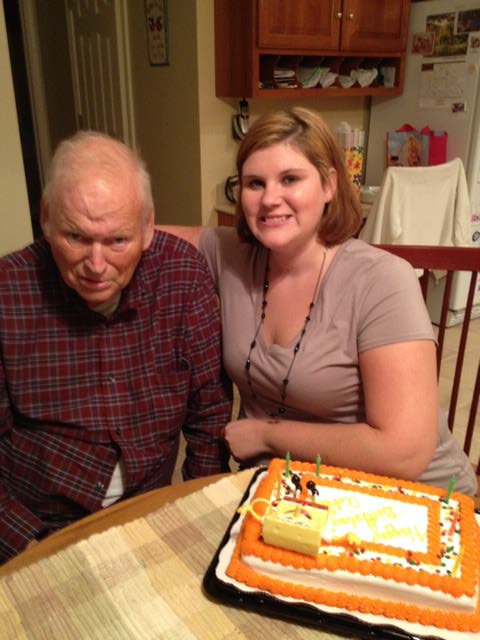 My grandfather Robert Corzine passed away from stage 4 non-small cell lung cancer on November 24, 2012. His diagnosis of lung cancer changed and affected my life tremendously. He started smoking at the young age of 18 years old; he tried quitting a couple of times with medications and cold turkey throughout the years but was never successful. He worked his entire life and traveled over an hour to work every day from Delaware to Arbutus Maryland to work at Northrop Grumman where he worked 10-12 hour days. He retired in 2010 at the age of 65 and was ready to enjoy retirement! But he was not able to do so for long.

In early 2011 he decided to volunteer at a local hospital and one of the requirements was a PPD test. The PPD test came back positive so a chest X-ray was ordered and that also came back abnormal. From there a chest CT scan was done that showed “spots” on his lungs. He was referred to an oncologist right away and they did a PET scan and this was when he was diagnosed with stage 4 non-small cell lung cancer in both of his lungs. They biopsied part of his left lung and performed many other tests. From the findings it was determined that he was only able to do clinical trial chemo drugs due to his type of cancer. He did three different ones. He struggled, developed blood clots and lost his hair, along with so many other issues. He was hospitalized numerous times due to the blood clots and falls.

He was a fighter and pressed on for a long time. His favorite holiday was Thanksgiving! His brother from Alabama and sister from Georgia came up to Delaware for Thanksgiving in 2011. His entire family was there to celebrate with him and to spend time together. My grandfather was 6’1" and my grandmother was 5’1" and she would help him to bed every night. On this particular night on Thanksgiving he waited until everyone left the house to go to bed and he fell going up a step from the family room to the kitchen. My grandmother was not able to assist him with this fall and had to call 911 for help. They transported him to the hospital and hospice was called in by the morning. He passed away that Saturday afternoon with his family surrounding him. He had little smile on his face after he passed. He was truly free and not in pain any longer.

I truly believe that he knew what he was doing and was ready to not be in pain any longer. My grandmother was his primary caretaker and they were fortunate enough that she didn’t need to work so she was there to care for him 24/7. My 3 year old daughter and I lived with my grandparents and I would help her as much as I could. I worked full time so I wasn’t able to attend the chemo treatments with them. However, having worked in the medical field for such a long time, I was able to answer questions, help with insurance issues and so much more. I worked in a primary care office at the time and would ask them questions regarding his care, medications, etc anytime my grandmother needed me too. She needed me and others to be there for her and to assist her with the emotional toll it was taking on her too. She was a strong women but the love of her life was not well and there wasn’t much they could do for her.

I helped them call hospice and get the hospital bed set up in the house. I helped in any way that I could and never felt like it was enough. My grandmother would try to do as much as she could for him. She loved any help that was offered to her and we all tried to be there for her emotionally during his battle and after he passed away. Being a caretaker is truly hard work and I was glad to assist in any way that I could. I always wanted there to be a way to fix it and to help him more. We watched Jeopardy! together and tried to figure out the answers. He was my financial expert, my go-to for Orioles baseball, my leader of the family.

Things could have been different if he would have received any type of preventive care for lung cancer screening. His physician knew that he smoked and he had a cough. Additional funding is needed for provider education, research opportunities and awareness. My family and I started walking in the lung force walks in Rehoboth Beach, Delaware in 2016 and have attended the walks every year since. Lung cancer advocacy is near and dear to my heart because of my grandfather. Research opportunities and awareness are something that I carry into my career as well. In my career I work with the Delaware Department of public health to promote preventive lung cancer screening awareness. My organization is currently working with six sites in the state of Delaware. We recommend evidence-based interventions for each site to increase the number of patients that are receiving the low dose CT scan for detecting lung cancer. We are also creating reports in the EHR’s identifying patients that COULD be eligible for the cancer screening and then mailing out a postcard to them with a packet of shared decision making information regarding the scan. There is a nurse navigator that receives the phone calls from patients if they have questions regarding the postcard or the screening. She can also set the patients up for the screening and reach out to their physician for an order. My hope is to present this information to Congress to advocate for additional funding so lung cancer can be detected earlier and screening becomes testing that physicians order more frequently.