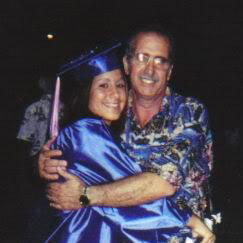 I can still remember exactly how it happened. My dad called my oldest brother over to our house and sat us down together at the kitchen table with my mother. He said to us "I'm very sick." I didn't need to hear another word before I was in tears and disbelief. He explained that he was diagnosed with stage 4 lung cancer and that he wouldn't be able to have surgery due to the location of the tumor and how close it was to his heart. He described his treatment plan which included aggressive chemotherapy and radiation treatments. I just didn't know what to think. All I knew was that my heart was breaking for my dad and I wished I could take it all away.

After a year of chemotherapy and radiation (and how sick it made him), my dad was to go to a follow up appointment with his doctor. We were all so anxious about what we would find out. By the power of modern medicine (and the glory of God), my dad was in remission. The tumor was gone. It was such a relief. He bought himself a new set of golf clubs and decided to live his life to the fullest. We enjoyed every moment we had with him and I was able to truly understand and appreciate the love a child has for their parent.

Unfortunately, his remission did not last long. Not even one year went by and he was back in the hospital. This time it was much worse and had spread to his lymph nodes. The prognosis was not good. Before we knew it, dad was bedridden and needing to be tube fed. There were numerous trips to the hospital. I watched the strongest man I know completely succumb to a disease that we never knew could infiltrate our lives in such a devastating way. I always wanted my dad to know that I never lost hope that he could get better. In an effort to convey that to my dad, the very last Christmas gift he got from me was the following: Florida Gator pajama pants (for football season) and slippers (for when I hoped he'd be back on his feet). I explained to him that he would need these and be walking around the house before we knew it. We lost dad the following January of 2004.

I always make it a point to let those I love know and to aspire to touch lives while I am here on this Earth. Starting in 2011, I have participated in the Fight for Air Climb in Tampa in honor of my dad. It's such an incredible feeling to know so many people support this cause and still have the hope that got us through my dad's fight.