Ever look at dirty tailpipe exhaust?

The dirty, smoky part of that stream of exhaust is made of particle pollution. Overwhelming evidence shows that particle pollution—like that coming from that exhaust smoke—can kill. Particle pollution can increase the risk of heart disease, lung cancer and asthma attacks and can interfere with the growth and work of the lungs.

What Is Particle Pollution?

Particle pollution refers to a mix of tiny solid and liquid particles that are in the air we breathe. Many of the particles are so small as to be invisible, but when levels are high, the air becomes opaque. Nothing about particle pollution is simple. In fact, it is so dangerous that it can shorten your life. 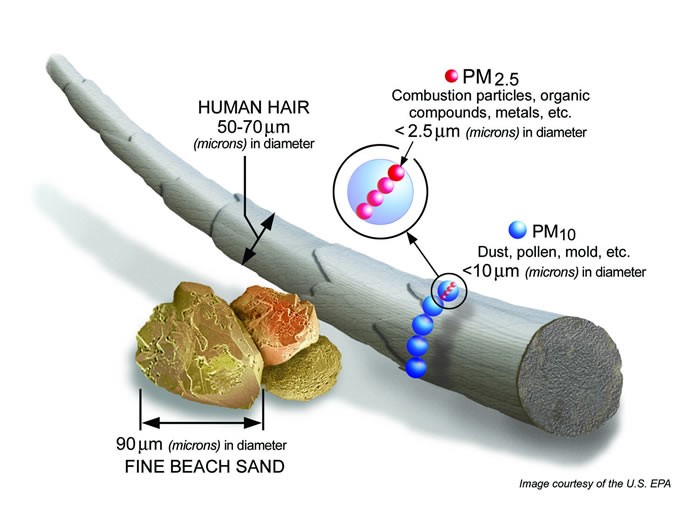 Size matters. Particles themselves are different sizes. Some are one-tenth the diameter of a strand of hair. Many are even tinier; some are so small they can only be seen with an electron microscope. Because of their size, you cannot see the individual particles. You can only see the haze that forms when millions of particles blur the spread of sunlight.

Researchers categorize particles according to size, grouping them as coarse, fine and ultrafine. Coarse particles (shown as blue dots in the illustration) fall between 2.5 microns and 10 microns in diameter and are called PM 10-2.5. Fine particles (shown as pink dots in the illustration) are 2.5 microns in diameter or smaller and are called PM2.5. Ultrafine particles (not shown) are smaller than 0.1 micron in diameter1 and are small enough to pass through the lung tissue into the blood stream, circulating like the oxygen molecules themselves. No matter what the size, particles can harm your health.

The differences in size make a big difference in where particles affect us. Our natural defenses help us to cough or sneeze some coarse particles out of our bodies. However, those defenses do not keep out smaller fine or ultrafine particles. These particles get trapped in the lungs, while the smallest are so minute that they can pass through the lungs into the bloodstream, just like the essential oxygen molecules we need to survive.

The mixtures differ between different regions in the United States and in different times of the year. Much of that comes from the sources that produce the particles. For example, nitrate particles from motor vehicle exhaust form a larger proportion of the unhealthful mix in the winter in western states, especially California and portions of the Midwest. By contrast, eastern states have more sulfate particles than the West on average, largely due to the high levels of sulfur dioxide emitted by large, coal-fired power plants.3

Who Is at Risk?

EPA had concluded in the past that people with diabetes are also at higher risk of harm from particle pollution. In their most recent review of people at risk, they revised that decision. The evidence of increased risk remains strong, especially given the increased risk of cardiovascular disease from diabetes. Research has found evidence that long-term exposure to particle pollution may increase the risk of developing diabetes. Two independent reviews of published research found that particle pollution may increase the risk of developing type 2 diabetes mellitus.9

What Can Particles Do to Your Health?

Particle pollution can be very dangerous to breathe depending on the level. Breathing particle pollution may trigger illness, hospitalization and premature death, risks that are showing up in new studies that validate earlier research.

These studies add to the growing research that cleaning up air pollution improves life and health.

Short-Term Exposure Can Be Deadly

First, short-term exposure to particle pollution can kill.1 Peaks or spikes in particle pollution can last from hours to days. Premature deaths from breathing these particles can occur on the very day that particle levels are high, or within one to two months afterward. Particle pollution does not just make people die a few days earlier than they might otherwise—these deaths would not have occurred so early if the air were cleaner.

A 2008 study of lifeguards in Galveston, TX, provided evidence of the impact of short-term exposure to particle pollution on healthy, active adults. Testing the breathing capacity of these outdoor workers several times a day, researchers found that many lifeguards had reduced lung volume when fine particle levels were high. Because of this research, Galveston became the first city in the nation to install an air quality warning flag system on the beach.11

Breathing high levels of particle pollution day in and day out can also be deadly, as landmark studies in the 1990s conclusively showedi and as later studies verified.2 Recent research has confirmed that long-term exposure to particle pollution still kills, even with the declining levels in the U.S. since 2000 3 and even in areas, such as New England, that currently meet the official limit, or standard, for year-round particle pollution.4

In 2013, the International Agency for Research on Cancer (known as IARC), part of the World Health Organization, concluded that particle pollution causes lung cancer. The IARC based its decision on the review of multiple studies from the U.S., Europe, and Asia and the presence of carcinogens on the particles.5

Research has also linked year-round exposure to particle pollution to:

Studies examining the impact on the nervous system of long-term exposure to particle pollution have found links to cognitive affects in adults including reduced brain volume, cognitive decrements and dementia.11 Scientists have found evidence that particle pollution may impact pregnancy and birth outcomes, such as preterm birth, low birth weight and fetal and infant mortality.12

The EPA is conducting their new review of the current research on particle pollution. Their findings from the last review, completed in December 2019,13 are highlighted in the box below

Where Does Particle Pollution Come From?

Mechanical processes break down bigger bits into smaller bits with the material remaining essentially the same, only becoming smaller. Dust storms, construction and demolition, mining operations, and agriculture are among the activities that produce particles. Tire, brake pad and road wear can also create particles.

Combustion of carbon-based fuels generates most of the fine particles in our atmosphere. Burning wood in residential fireplaces and wood stoves as well as wildfires, agricultural fires and prescribed fires are some of the largest sources. Wildfires are growing, particularly in the Mountain West because of climate change. These processes create about 36 percent of fine particles.1 Burning fossil fuels in factories, power plants, diesel- and gasoline-powered motor vehicles (cars and trucks) and equipment emits a large part of the raw materials for fine particles.

Are Some Particles More Dangerous than Others?

With so many sources of particles, researchers want to know if some particles pose greater risk than others. Researchers are exploring possible differences in health effects of the sizes of particles and particles from different sources, such as diesel particles from trucks and buses or sulfates from coal-fired power plants. Recent studies have tried to answer this question. So far, the answers are complicated.

Each particle may have many different components. The building blocks of each can include several biological and chemical components. Bacteria, pollen and other biological ingredients can combine in the particle with chemical agents, such as heavy metals, elemental carbon, dust and secondary species like sulfates and nitrates. These combinations mean that particles can have complex effects on the body.1

Some studies have found that different kinds of particles may have greater risk for different health outcomes. 2,3,4

Other studies have identified the challenges of exploring all the kinds of particles and their health effects with the limited monitoring across the nation.5,6Some particles serve as carriers for other chemicals that are also toxic, and the combination may worsen the impact.7,8

The best evidence shows that having less of all types of particles in the air leads to better health and longer lives.