I've Quit So Many Things in My Life. Quitting Smoking Was the Hardest.

The American Lung Association is sharing inspiring stories from individuals who have been able to end their addiction to tobacco and stop smoking through #TheDayIQuit blog series. Quitting smoking isn't easy, but it is possible—and we firmly believe that anyone can quit with the right support. If you, or someone you know, would like to quit smoking, share with them the new, interactive Freedom From Smoking® Plus.

Have your own quit story to share? Leave a comment below and we'll work together to showcase your success and inspire others to start their quit.

I've quit many things in my life but quitting smoking was the hardest. It's been eight years since I quit smoking and it blows my mind how much the smoke that I used to love bothers me so much now. I have friends and a sister that still smoke and I can't be in the car or around them when they smoke. My sense of smell and taste has gotten so much better that any trace of smoke has a huge effect on me.

I had my first cigarette when I was 13—I snagged one from my parents—but it didn't stick. Then at age 15, I actually inhaled and was immediately hooked on cigarettes. During periods of my life, I would quit smoking—when I was pregnant and had a newborn, for instance—but during tense or stressful moments, I would pick it back up.

My grandmother passed away when I was 35 and it was a breaking point in my life. She smoked all of her life, and I couldn't imagine spending the rest of my life smoking. My mom and I decided to quit smoking together, and enrolled in an American Lung Association Freedom From Smoking Group Clinic. 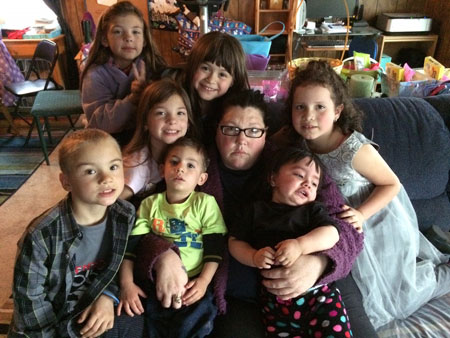 The eight-week course made us look at all of the times we smoked and encouraged us to change up some of those routines. For instance, I used to love to drive and smoke—the window rolled down and a few moments of escape. When I quit, I actually stopped driving for a few days because the car was just too much of a smoking trigger for me. My mom and I did other things, like sitting in different spots at the kitchen table or while watching TV than where we typically sat and smoked. Just little things to shake up that routine of smoking.

Going through the course together and having my mom's support really helped me. We would chew on straws and call each other out when we were grumpy over those first days when the cravings were really bad. She kept me honest and together, we both were able to stay smokefree. We saved all the money we would have spent on cigarettes in a glass jar and rewarded ourselves with a nice dinner and treats when it got full.

I didn't realize how much time smoking took from me. I'm an avid reader now. Instead of smoking, I read books! I haven't smoked since March 7, 2007—and I'm so thankful that I was able to quit before my grandchildren were born. I have the energy (sometimes!) to play with them, and they never have to see their grandma smoking.

It's been eight years, and I can't imagine any other way of living now.