State of Tobacco Control: Answers to Your Burning Questions

This week, we released our annual "State of Tobacco Control" report, which grades states and the federal government on key policies that can help prevent and reduce the death and disease caused by tobacco use. 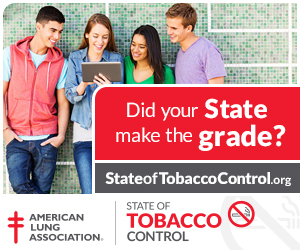 Every state is evaluated on proven, effective methods to protect people from the harms of tobacco use, boiled down to the following four grades:

States earning "A" grades should be proud of that accomplishment—they are taking important and necessary steps to protect hundreds of thousands or even millions of people from the scourge of tobacco use and dangers of secondhand smoke. Sounds important, right? We think so, but understandably there are many questions that come up when it comes to policies and regulations. So, we've put together a few answers to commonly asked questions about tobacco control from the authors of our "State of Tobacco Control 2016" report.

Q: What does tobacco "control" mean?

A: Plain and simple, it means to reduce and eventually eliminate tobacco use and exposure to secondhand smoke. More than 480,000 lives are lost in the U.S. to tobacco each year, we want to make that as close to zero as possible.

Q: Why should we increase tobacco taxes?

A: Raising tobacco taxes can be called a triple win in terms of what it can accomplish. Not only does raising tobacco taxes significantly increase the likelihood of adults quitting, but it actually has an even greater impact on kids starting to use tobacco. With these extra funds, policymakers should dedicate a healthy portion to tobacco prevention and cessation programs to prevent more kids from starting and help even more people quit. However, nearly all states have work to do.

Q: Why should we fund state tobacco control programs?

A: There are many really good reasons! For one thing, funding tobacco control programs can and does counter the $9.2 billion in predatory marketing the tobacco industry deploys. In addition, not only does the money provide for programs and services which in turn help prevent kids from starting and help people quit tobacco use, it also sustains and increases reductions in smoking from other policy initiatives like tobacco taxes. There are even numbers to back it up with California's Tobacco Control Program, the longest running program since 1989 in the U.S. A 2013 study found that California saw a greater than 55 to 1 return on investment with healthcare costs reduced by an astonishing $184 billion from 1989–20081and lung cancer incidences are declining faster than the rest of the nation.2

Q: My state is broke. How can we maximize my state's prevention and cessation program money?

A: No, numerous studies in multiple states have shown no decrease in overall economic activity and actually a small increase in sales or employment in some cases. It makes sense since smokefree restaurants, for example, will attract new customers who avoided the place due to secondhand smoke before the law was enacted. However, it's important to remember that we can't depend on businesses to volunteer to be smokefree, it needs to be a law so that everyone—workers and customers—are protected. But the bottom line? Everyone deserves to breathe clean air.

Q: What does the Access to Cessation Treatments Grade measure and why is it important?

A: The Access to Cessation Treatments grade measures how well a state provides access to tobacco cessation treatments under state-sponsored health insurance programs, including the state Medicaid program, the seven Food and Drug Administration (FDA)-approved cessation medications and three forms of counseling that have been proven to help tobacco users quit. States often don't cover all tobacco cessation treatments or they put barriers in place to make it more difficult to access treatments, such as burdensome co-payments or prior authorization requirements. Patients enrolled in state Medicaid programs smoke at a rate over 50 percent higher than individuals with private insurance, so easy access to proven treatments is vital for them. The grade also looks at how well state quitlines, state-run services that can help tobacco users quit by phone, are funded. More funding means more tobacco users that can be helped.

Want to learn more about tobacco control policies? Check out the State of Tobacco Control report to see if your state got an A—or what it needs to do to improve! Then please take action to let our policymakers know we need to end tobacco use once and for all.

PLUS: Who is really benefiting from the tobacco settlement money? Get the scoop on state tobacco prevention funding, from Thomas Carr, the lead author of the State of Tobacco Control report.