It's National Volunteer Week, and at the American Lung Association, volunteers are the lifeblood of our organization. Whether making calls to their lawmakers, working the registration table at a LUNG FORCE Walk, or leading an Open Airways for Schools class, we depend on volunteers to advance our mission to save lives by improving lung health and preventing lung disease.

One such volunteer is 18-year-old Temoore Raja, who has become a lung health advocate among his peers and in his community.

Temoore, of Tomball, Texas, lost his father to lung cancer in 2015 after he was diagnosed with Stage 3B lung cancer a year earlier. The heartbreak of losing his father led Temoore to advocacy and lung cancer awareness work.

"I started my lung cancer work in honor of my father and with the intention to spread awareness about lung cancer in my local community," Temoore said. "With this in mind, I joined a community awareness competition for the Health Occupation Students of America (HOSA) club."

He held education events for members of HOSA, including Shine Out Lung Cancer, a memorial to those who lost their lives to the disease as well as those currently battling lung cancer. Temoore also encouraged all 355 members of his HOSA chapter to fill out a petition to raise the federal tobacco tax. He met with Texas Rep. Patricia Harless and encouraged her to support a bill that increased lung cancer awareness and reduced the stigma associated with lung cancer. Lastly, he created a public service announcement explaining the dangers of smoking, and the video was distributed throughout his HOSA chapter and high school.

After all of this, Temoore met Dr. Rubina Abrol, asthma programs manager for the American Lung Association in Texas, at an event and shared with her how lung cancer had affected his life. The two began working together and organized a bubble soccer (playing soccer while wearing plastic orbs) tournament to teach teenagers about the dangers of smoking, tobacco products and e-cigarettes.

"He told me his story and how the only thing he wanted to do was to honor his dad's memory by creating positive change," Abrol said. "In a time when most young adults would be consumed with the everyday happenings of adolescent life, Temoore has taken the initiative to bring hope and change out of a tragedy. It makes me feel safer knowing that the work we do at American Lung Association will thrive with the enthusiasm of volunteers like Temoore."

Abrol was so impressed with this young man's passion and commitment to educating more people about lung cancer that she created the American Lung Association Hometown Hero Award. She presented the award to him through HOSA as a surprise, working with  his mother and HOSA teacher.

"The Hometown Hero Award symbolizes my hard work to help raise awareness for lung cancer in my local community," Temoore said. "It signifies my determination to help make a change and decrease the amount of smokers in the U.S. I was extremely proud when I received this award because it meant that my efforts were being recognized and I was making a change. It also meant that I had broken the barrier of spreading awareness in my local community and branched out to other surrounding communities."

Temoore will graduate from high school this spring and plans to study finance or accounting along with taking premedical courses. His ultimate goal is to attend medical school and become an orthopedic surgeon or oncologist. 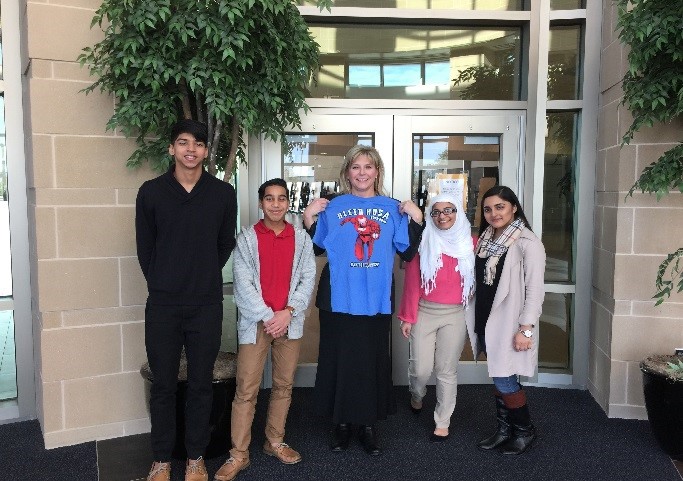 "Temoore volunteers for EVERYTHING," Abrol said. "He lives his life for service. I feel lucky to have met him."

The American Lung Association is the nation's oldest voluntary health organization, and was founded on the principle that citizens can come together and partner with researchers to do something about health issues. Lung cancer is the leading cause of cancer deaths in the U.S. and by partnering with Lung Association, volunteers like Temoore can take action to address lung cancer and other lung diseases and create the world they wish to see.