Forget the Post-Apocalyptic Setting Killing You, What About the Dust? 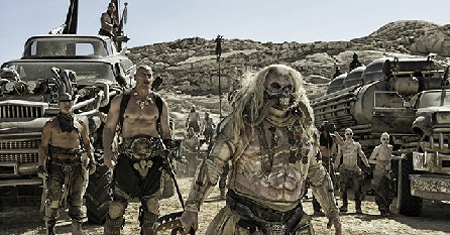 With the Academy Award season upon us, we can't help but check out some of the films up for nomination and see the brilliant performances, environments and action that help make them stand out from the rest. One such film, Mad Max: Fury Road, already had a vocal following on the Internet shortly after its May 2015 release, and still has an impressive rating of 97% on Rotten Tomatoes. While many critics will go into depth examining if Mad Max is truly worth the hype and others argue that it should win best picture, over here at Each Breath HQ, we couldn't help but notice a rather minor but important detail — boy, there's a lot of people wearing masks.

Naturally with any scenario like post end-of-the-world, we assume natural resources such as water and gas will be scarce and probably rationed out by a power hungry warlord. What many people probably don't consider are the risks to lung health. After all, humans need to breathe to survive.

Think about it: they live in a desert, where blowing sand creates towering dust clouds (or particle pollution), and those gas-guzzling cars kicking up even more sand, and rocking electric guitars on fire are definitely not the most lung-friendly. And who knows what chemicals are in the trail of explosive fire from the bombs they launch at each other? But the most obvious ramifications of that harsh environment on lung health are showcased through the movie's villain, Immortan Joe . He wears a menacing looking respiratory mask adorned with horse teeth that is hooked up to large breathing apparatus on his back. We see him wheezing and realize he needs this breathing mask to survive — not just for its intimidation factor. Immortan Joe controls all the resources in this population — water, food, people. So why is his health failing so fast, when he has the stranglehold over virtually everything necessary to survive?

We've covered before the dangers of dust in space but we can't forget the dangers of sand, pollution and airborne particles on earth. These risks aren't just the product of creative movie makers. Whether living in a desert environment, trapped in a sand storm or working in a coal mine, dusty environments expose the respiratory system to particles (sand, dust, etc.). Generally we can cough or sneeze the larger particles out, but smaller particles pose serious problems. Very fine particles can cause serious health issues like silicosis, or scarring of the lungs caused by silica, a mineral found in sand and rock. And what else is dusty and sandy? Post—apocalyptic Australia, ala Mad Max: Fury Road. Particle pollution, likely from his double 1959 Cadillac Coup Deville ride, would not have helped matters either, especially in Immortan Joe's older and more vulnerable age. Talk about a double whammy.

Naturally, this is all speculation since the wikia for Mad Max, while extensive, is a little bare on the details of why other characters don't have masks to protect themselves. It helps with the menacing look. Still, if we were to research on how to survive the apocalypse, a mask would definitely go in our kit. And a water converter. And food. And — You get the idea.