An Asthma Attack at 140 MPH

TJ Fischer is an American racecar driver who has participated in the Mazda Road to Indy, Formula Renault 2.0 ALPS, BARC Protyre Formula Renault Series and more. A self-proclaimed "track kid," TJ got behind the wheel of a kart at the age of 10. And like many athletes before him, he manages his asthma with the same preparation and focus as he does his sport.

There I sat, with intense focus, waiting for the race to start. Nestled in the cockpit of a Formula Renault 2.0 car, I looked out at the concrete jungle quickly planning my attack, as I would embark into the race as the only American driver in the championship. The entire city of Pau, France was swimming with buzz of the Grand Prix running all week and fans from across the globe. It was the 74th running of the Grand Prix de Pau, on a beautiful spring weekend in May, located at the tip of the Pyrenees Mountains.

This was it, my nerves at an all-time high as I got a pat on the head from my mechanic, followed by the call to start engines. The grid cleared and the start lights illuminated. 3, 2, 1, GO!! I got an excellent start, went round the outside in an aggressive move into Turn 1 and gained seven positions. Hold fast!! The start was spectacular, and the best I could wish for, but now the mental and physical challenge was about to begin. Holding my position would be immensely tough and gaining a position would be next to impossible. It also takes extreme physicality to wrestle a mini Formula 1 car around the tight and twisty narrows of one of the world's most elegant yet technical street circuits. I started to fall into my rhythm and was catching the cars in front of me.

In that moment, I slowly noticed everything seemed to get more difficult. I was making small mistakes and it was costing me. I focused more, and discovered that I was fighting extremely hard to breathe. "Could I be tired already?" I asked myself. Yes, but not normal fatigue, this was an asthma attack. A rush of emotions violently went through my head ranging from "Why me?" to "Wow, I really can't breathe." The biggest question remained, "Can I finish?" With 15 minutes to go in the race I was faced with a challenge and a decision; control my breathing for the remainder of the race, barreling through the street circuit at upward of 140 mph, or pull over and find the nearest medical tent and forfeit the race.  As an athlete, with a team supporting me, and all the preparation that had been done to be in the race, I knew in my heart I could not pull over and abandon the effort. 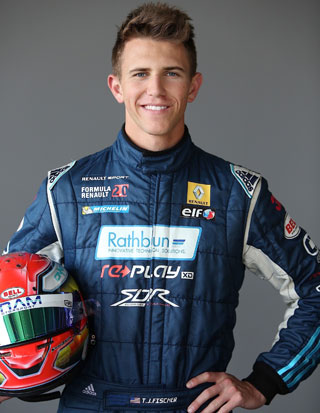 In those early laps, I found that in certain parts of the track I could breathe easier.  And in certain parts I could hardly breathe at all.  So as I passed through the lower section on the straightaway, with few trees around, I cracked my visor and got wind and precious breaths of air. On the tricky, harrowing and challenging upper section with a lot of trees, I struggled to breathe.  With a lap less than two minutes long, I was able to will my way through that tough section, until I was able to get down to the lower section of the track where I was able to breathe easier. Believe me, those next 15 minutes were physically and mentally exhausting, with each lap contemplating pulling into the pits. I forced myself to stay out, to just go one more lap, then one more lap, then one more lap. I held my position and not passing, but not being passed. I knew I had to finish and prove to myself I could do it, and make a stand that asthma was not going to control me.

The checkered flag flew. I stopped directly after the finish line, got out of the car in a heave and laid there in exhaustion just trying to catch my breath. I was quickly surrounded by the medical team and given oxygen followed by albuterol to counteract the wheezing.

That Pau asthma attack was a moment of realization for me and one that set the stage for future races. I've lived with asthma my whole life but learned that preparation was monumentally important in my life as a racecar driver. Pau is home to 82 different kinds of trees, making for a whole gaggle of allergy-infested pollen in spring. A perfect storm paralleled with the right conditions and that's all it takes. Since then my team and I have collaborated on an Asthma Action Plan for better asthma managements and for extreme situations. Knowing when I need my rescue inhaler and my regular control inhaler, and how certain conditions trigger my asthma are important for all members of my team to know. It's possible to have a full and active life when you live with asthma, as long as you are prepared. I learned that during my race in Pau, so you don't have to!