The Gavel that Unraveled the Tobacco Industry

On August 17, 2006, federal judge Gladys Kessler found the major tobacco companies—including Altria (Philip Morris) and RJ Reynolds—guilty on civil racketeering charges (i.e., organized criminal activity). On that day, she issued a final judgment and  1,683-page opinion  that found the companies had been covering up the health risks associated with smoking and marketing their products to children for decades.

10. The tobacco companies "concealed and suppressed research data and other evidence that nicotine is addictive."

8. The tobacco companies own internal records showed "that smokers switch to low tar/light cigarettes, rather than quit smoking because they believe they are less harmful." 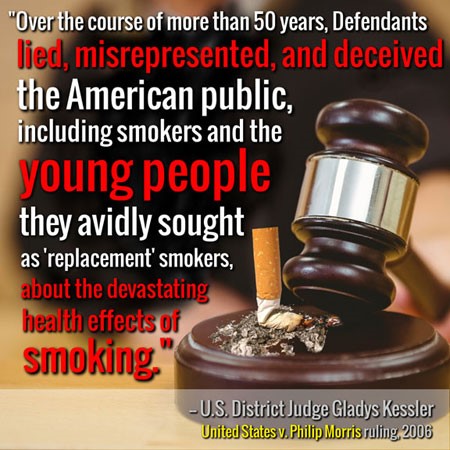 6. Starting in the 1950s and lasting at least through 2006, different tobacco companies "at different times and using different methods, have intentionally marketed to young people under the age of twenty-one in order to recruit 'replacement smokers' to ensure the economic future of the tobacco industry."

4. The tobacco companies "have publicly denied what they internally acknowledged: that ETS [secondhand smoke] is hazardous to nonsmokers."

2. The tobacco companies' "marketing is a substantial contributing factor to youth smoking initiation."

1. "[This case] is about an industry, and in particular these [tobacco companies], that survives, and profits, from selling a highly addictive product which causes diseases that lead to a staggering number of deaths per year, an immeasurable amount of human suffering and economic loss, and a profound burden on our national health care system. [The tobacco companies] have known many of these facts for at least 50 years or more. Despite that knowledge, they have consistently, repeatedly and with enormous skill and sophistication, denied these facts to the public, the Government, and to the public health community."