Lung cancer incidence, staging, surgical treatment, and lack of treatment data is for years 2013-2017 and includes malignant lung and bronchus tumors. These data are based on the North American Association of Central Cancer Registries (NAACCR) December 2019 data submission. In the U.S., registries also participate in the National Cancer Institute's Surveillance, Epidemiology, and End Results (SEER) Program or the Centers for Disease Control and Prevention's (CDC) National Program of Cancer Registries (NPCR) or both. Support for cancer registries is provided by the state, province or territory in which the registry is located.

Incidence data for Kansas and Nevada are for 2012-2016 and from CDC’s WONDER Online Database United States Cancer Statistics as data from these states were not included in the NAACCR data submission.

Survival rates are the age-standardized percent of cases still alive five years after diagnosis for cases diagnosed in years 2010-2016. These data are from Cancer in North America: 2013-2017 Volume Four: Cancer Survival in the United States and Canada 2010-2016 from NAACCR. Survival data was not available for four states.

Lack of treatment is the percent of lung cancer diagnoses that did not receive any medical treatment generally associated with lung or other cancers, including the following: removal, biopsy or aspiration of regional lymph node; surgical removal of distant lymph nodes or other tissue(s)/organ(s) beyond the primary site; surgery for lung cancer; radiation; chemotherapy; systemic hormonal agents; immunotherapy; other, including experimental, double-blind, and unproven; and transplant or endocrine surgery or radiation.

Data on the number of screening exams meeting USPSTF criteria came from the American College of Radiology’s (ACR) Lung Cancer Screening Registry State Level Comparison for 2019. We believe this registry represents most lung cancer screenings as it is the only approved registry at this time, and screening facilities are required to submit data on all lung cancer screenings to it in order to meet Medicare eligibility requirements.

This research was supported by the ACR’s National Radiology Data Registry (NRDR). The views expressed in this report represent those of the authors, and do not necessarily represent the official views of the NRDR or the ACR. The authors wish to thank the Lung Cancer Screening Registry steering committee and ACR staff for the use of registry data.

The number of people at high risk for lung cancer was based on USPSTF criteria, which defines high risk as ages 55-80 years of age; 30 or more pack-year history of smoking (one pack a day for 30 years, two packs a day for 15 years, etc.); and are a current smoker, or have quit within the last 15 years.

As the number of people at high risk was not available at the state level, we developed a model to adjust state estimates of current and former smokers ages 55-80 using predictors of pack year history and number of years since quitting from CDC’s 2015 National Health Interview Survey (NHIS).

The number of current and former smokers ages 55-80 for each state was estimated using 2018 Behavioral Risk Factor Surveillance System (BRFSS) data from the CDC. The 2015 NHIS was the most recent survey to include questions necessary for determining pack year history and years since quitting. Logistic regression was used to determine which variables common to both the NHIS and BRFSS best predicted a 30 or more pack year history for current and former smokers and less than 15 years since quitting for former smokers, all aged 55-80. Reported health status (excellent, very good, good, fair, bad) by smoking status (current or former) was found to be the strongest and most parsimonious model and produced results for number at high risk and percent at high risk receiving screening similar to those from published literature. These results were the denominator for determining screening among those at high risk, with the number of screening exams meeting USPSTF criteria as the numerator.

Smoking rates are the percent of adults who have ever smoked 100 or more cigarettes and currently smoke on some days or all days using data from the 2018 BRFSS.

The number of counties in each state by radon zone comes from the Environmental Protection Agency’s Map of Radon Zones.

States were ranked from best to worst for each cancer-specific measure. In addition, statements describing the distance from the mean for each specific state measure were crafted to provide a clearer understanding of how each specific data point falls within the national data range, and how the state data differs from the national average.

Statements such as “above average tier” and “average tier,” were determined by dividing each measure (incidence, smoking, survival, early diagnosis, surgery, lack of treatment, and screening) into two sets of five contiguous ranges; one set ranging from the maximum observed value to the national average, and the other from the national average to the minimum observed value. Data values were described by which category they fell into: 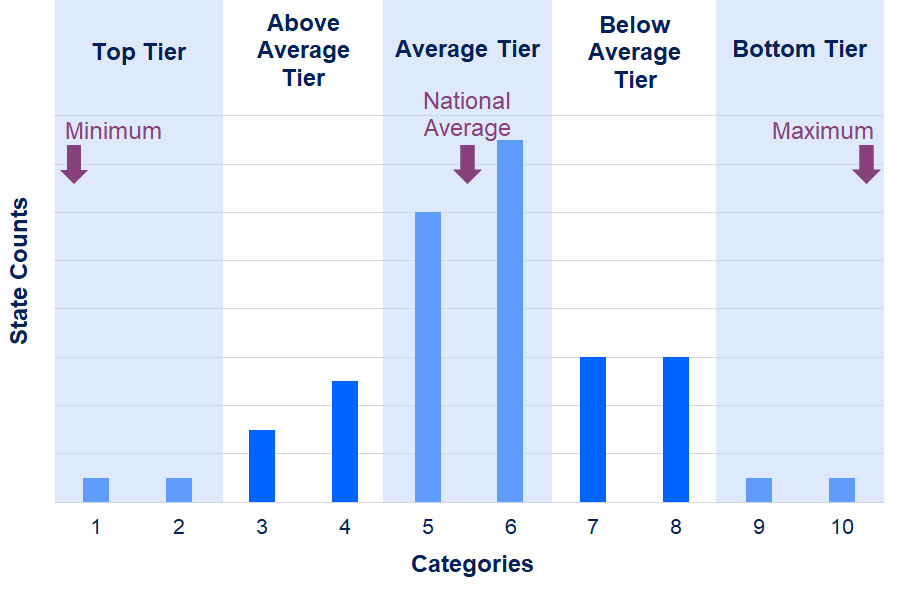 Sign our petition asking Congress to protect and improve access to quality and affordable healthcare coverage for people with or at risk for lung cancer.