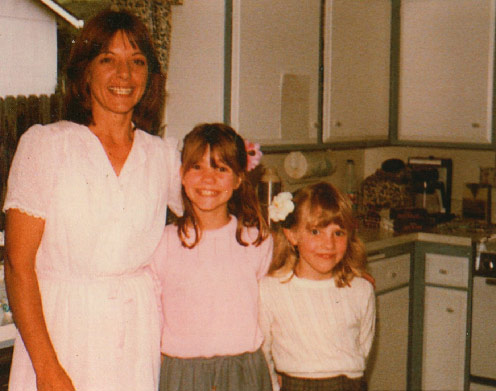 "Did she smoke?" When people found out my mom had lung cancer that was the first question they asked. As if finding out that she did would make it better. As if knowing the answer would prove that she in some way deserved a share of blame for her diagnosis. As if, when the answer was yes, they were protected from worrying about getting lung cancer, because they didn't smoke. My mom was amazing. She was smart, stubborn, strong, and fearless. She fought every step of the way, but by the time they found her cancer it was too late. She was stage four, and really there was nothing they could do. She was a single mom, she raised both my sister and me all by herself, and when she was diagnosed she worried not really for herself, but for us. Even though I was 37, and my sister 34, she talked endlessly about how important it was to her that we remain strong after she was gone. She worried so much about her grandchildren, and the toll watching her struggle was taking on all of us. She would gather us together and tell us that this time together was a gift. That she was blessed to have the knowledge of what was coming, so that she had a chance to say goodbye, and the chance to know that she had touched so many people during her lifetime. The flowers, the phone calls, the donations of time and money that people gathered together during her four months from diagnosis to the time she passed away.... she viewed it all as a gift. She was a housekeeper, and told me that in her struggles to provide for us over the years she sometimes felt like a failure. That a housekeeper wasn't a noble profession, that we couldn't be proud of her. As she got more and more sick, and as she fought with everything she had to stay with us, her clients rallied around her. She had worked for some of them for over 20 years. She was a part of their lives, a part of their families, and each and every one of them considered her their friend. She talked about what a gift it was to finally realize that her life did make a difference, and how without the cancer she never would have known. She died January 3, 2009. She was 57 years old. She never saw my daughter graduate from high school, she never saw my niece, who was born in 2010. We named her after my mom. Coming up will be five years since she passed. Whenever I tell people that my mom passed away from lung cancer I get the same question. "Did she smoke?"