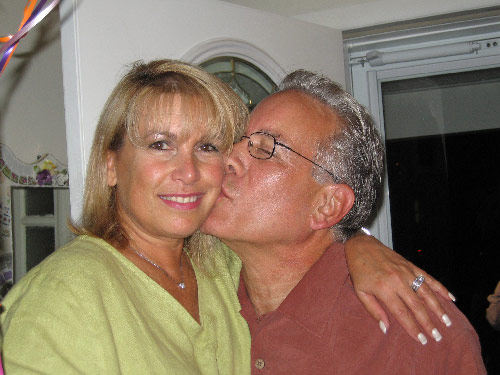 My husband was diagnosed with kidney cancer, and when we went to see the surgeon, he informed us that there was a spot on the lung. Fast forward to the thoracic surgeon, who removed his upper left lobe, and staged it 1 B because the node was on the lining of the pleura. I didn't know how important that would be until 4.5 years later. He had a partial left nephrectomy 6 weeks later, and no chemo treatment because of timing, and the fact the he was 1 B - he recovered well, and was being followed by a lung oncologist. He had scans every 3 months, the first year - moved to every 6 months the following years, with good scans, until Barry had a double bypass surgery in July 2011. The surgeon noticed a suspicious looking node on the pleura, biopsied it and told us it was malignant. He had 35 days of proton radiation, along with his first line chemo treatment. The next scan showed no improvement, and we also found out at that time that my husband had the Kras gene, and that there were no effective chemo drugs for this particular mutation. He developed a pleural effusion, and in April of 2012, had a thoracentesis, and the fluid was found malignant, which moved him to Stage IV. At the time, I thought my life would change quickly, but I am thrilled to say, that my husband is alive and kicking, 18 more months later. Once he was moved to Stage IV, the oncologist suggested palliative care/chemo, which made him very ill (heart issues, A-Fib, high fevers and visits to the E.R.) Switched to a different drug with the same results and his scans reMEd the same - Stable, until this last one, 8/29, where there shows some progression in the size of the tumors. Barry has small nodes lining his pleura, but he has had no other metastases and we consider him to be our miracle, since a year and a half ago, we didn't know if he would be alive. He's really never gained back his stamina, and is extremely tired, but takes his 2 hour nap most days, and continues to look healthy. The oncologist is on our side when it comes to further treatment. We feel that at this point, it's most important for Barry to "feel" good, and other than some backaches and fatigue, he is doing really, really well. We will walk our 3rd year in the FTB walk in November, in the meantime, we remain optimistic. I think that attitude has a lot to do with fighting the beast. We have a supportive group of family and friends, and enjoy our "new normal".