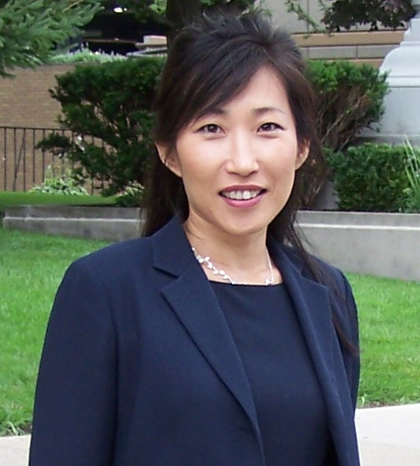 Theresa moved to Sturgeon Bay, WI from Seoul, South Korea in 1980 at the age of 14, and we first dated in 1984. Eighteen years later, in the fall of 2002, we were reunited. I was starting Grad school at the time, so we all (Theresa and her two boys) moved Middleton, WI in August of 2005. That fall I proposed to her and we were married on July 1, 2006. In late July, Theresa made the comment, "I think my body is trying to tell me something," as she developed a wispy cough that would not go away. This went on through August until we decided to see a doctor who promptly sent us to a pulmonologist for biopsy. Theresa was diagnosed with non-small cell lung cancer on 18 September 2006, just 2 months and 18 days after our wedding day. Theresa used to tell people "we cried for a week, and then I got to work." She was very determined to beat LC. Luckily, we were referred to a fantastic oncologist in Chicago. She recommended an oral chemo, which was found to work among Asian women....and it did for two years! We were thrilled...tumors were shrinking, we went on vacations, raised our family, and she worked full-time at the WI Counties Association. Life was good! After two years, the cancer evolved and the drug failed to work. This began our 2.5 year odyssey with standard chemos and drug trials, which was harsh on her little 105 lb body. She was always tough, but chemo was steadily chiseling away at her physical reserves. Her spirit never wavered, however. Theresa's health began a steep descent in the winter of 2011, which was the most trying time for all of us. But, through it all she was graceful, grateful for family, courageous, and even humorous. In 2006 she said "I just want to live long enough to see Justin graduate." On the 18th of June 2011, Justin (youngest son) graduated from high school. Theresa was very weak and could not attend the ceremony, but I was able to Skype it to her...so she and her friend, Becky, watched the whole thing! Approximately, two weeks later on the 30th of June, 2011, at 7:33 P.M. Theresa's suffering peacefully ended. She refused all morphine on the last day because she "wanted to experience the crossing over with a clear mind," which she did. Near the end she kept asking "what time is it?"...as our 5-year wedding anniversary was just 5 hours away. I have never witnessed such strength, character, and spirit before. Theresa was a force and a remarkable woman!