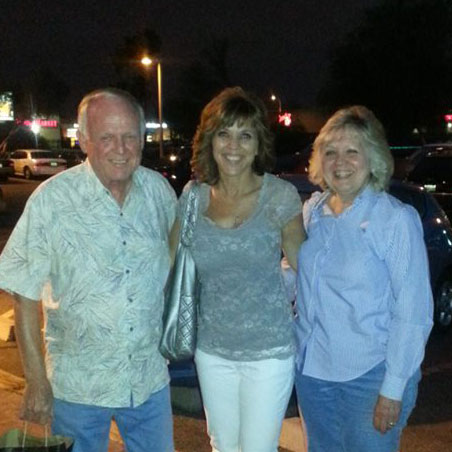 My dad found out July 1, 2013 (just a month before his 68th Birthday, and less than a year after retiring from a family owned flooring business) that the "clearing of his throat" that he kept doing wasn't allergies...it wasn't valley fever.....it was non-small cell lung cancer, stage III a. We were told it was non-small cell, however, I believe that was a misdiagnosis. My dad went through surgery to remove a portion of his right lung, and a section of 3 ribs that his tumor had attached to. He went through chemo. Upon finishing chemo shorty before Christmas, dad's mobility had declined. We found out he now had 11 lesions/tumors in his brain (did you know that there is a blood brain barrier?....chemo can't protect the brain!....we...did NOT know this prior to chemo). My dad went through whole brain radiation therapy. This was excruciating, and eventually debilitating. Upon finishing, his mouth was covered in sores, he was in extreme pain, and was no longer able to stand without pain. Back into the hospital, dad was there for 3 days. We finally found out that dad's cancer had spread and now it was in his liver, his pancreas, nodes near ribs, another tumor in remaining lung, sepsis throughout, and to top it all off, pneumonia. NOBODY said "hey! You should contact the American Lung Association." We were never given any resources, we felt alone, and abandoned. My dad spent his last 2 nights in Hospice of the Valley, he closed his eyes on Feb 5, 2014 and he never opened them up again. He left to go to Heaven on Feb 7, 2014. Knowing what I know now,I believe I would forego treatment, and live my last days being happy and functional with my family. Lung Cancer is a horrible disease, and it affected a hard working husband, father, grandfather....a man who was NOT a smoker. I pray for a cure so that another family won't have to lose someone they love!